For years, stem-cell researchers have faced hurdles in developing potential therapies. Side effects, such as tumors, persist. Scientists lack an effective and long-term animal model to test new therapies. Sometimes they encounter genetic incompatibility between the host and the donor cells.

Now, investigators at the University of Missouri have developed the ability to take regular cells from pigs’ connective tissues, known as fibroblasts, and transform them into stem cells, eliminating several of these hurdles. The discovery was published in the Proceedings of the National Academy of Science. 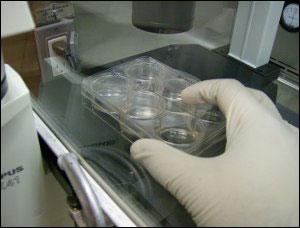 “It’s important to develop a good, accurate animal model to test these new therapies,” said R. Michael Roberts, Curator’s Professor of Animal Science and Biochemistry and a researcher in the Bond Life Sciences Center. “Cures with stem cells are not right around the corner, but the pig could be an excellent model for testing new therapies because it is so similar to humans in many ways.”

In their research, Roberts — along with Toshihiko Ezashi, a research assistant professor of animal sciences in the College of Agriculture, Food and Natural Resources and lead author on the study, and Bhanu Telugu, a post-doctoral fellow in animal sciences — cultured fibroblasts from a fetal pig. The scientists then inserted four specific genes into the cells. These genes have the ability to “re-program” the differentiated fibroblasts so that they “believe” they are stem cells. These ersatz stem cells take on many of the properties of stem cells that normally would be derived from embryos and, like embryonic stem cells, differentiate into many, possibly all, of the more than 250 cell types found in the body of an adult pig.

Since these “induced pluripotent stem cells” were not derived from embryos or from cloning, the approach eliminates some of the controversy around embryonic stem-cell research. Pluripotent stem cells have the ability to differentiate themselves into nearly all cells.

Stem cells are cells found in most, if not all, multi-cellular organisms. They are characterized by the ability to renew themselves through mitotic cell division and differentiate into a diverse range of specialized cell types.

In a developing embryo, stem cells can differentiate into all of the specialized embryonic tissues. In adult organisms, stem cells and progenitor cells act as a repair system for the body, replenishing specialized cells, but also maintain the normal turnover of regenerative organs, such as blood, skin or intestinal tissues. 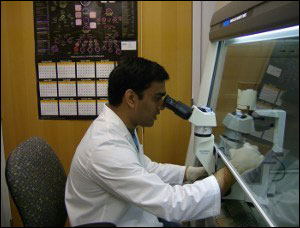 Medical researchers believe stem-cell therapy has the potential to dramatically change the treatment of human disease. A number of adult stem-cell therapies already exist — for example, bone-marrow transplants used to treat leukemia. Medical researchers anticipate being able to use technologies derived from stem-cell research in the future to treat a wider variety of diseases, including cancer, Parkinson’s disease, spinal-cord injuries, amyotrophic lateral sclerosis, multiple sclerosis and muscle damage, among a number of other impairments and conditions.

The right animal for the job

Initial research into the MU’s stem-cell concept began with lab mice, but the small rodents proved a poor model because their relatively short life span wouldn’t allow for long-term evaluation of host rejection of the transplanted cells. Using pigs, which live longer, allows researchers to observe any long-term effects of the therapies, Telugu said.

The physiology of pigs is much closer to that of humans, too, particularly in pulmonary and respiratory areas. Heart-disease problems in pigs closely resemble those in people, making the pig a good animal model for therapy research.

The next step for Roberts and his team is to determine how to direct the new stem cells to develop into specific cell types.

“Right now, we researchers have not answered questions concerning how to make stem cells develop into just one type of cell, such as those of liver, kidney or blood cells, rather than a mixture,” Roberts said. “Now that we have been able to turn regular cells into stem cells, we need to learn how to make the right type of tissue and then test putting that new tissue back into the animal.”