With daily headlines describing recessions and cutbacks, it is always good to have uplifting news to share. The MU College of Agriculture, Food and Natural Resources officially surpassed its campaign goal for the For All We Call Mizzou campaign. 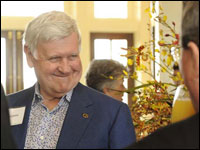 CAFNR exceeded the $60 million goal by $594,981. The college raised approximately $18.1 million through alumni donations; $12 million from friends of the college; $29 million from corporations, foundations and organizations; and $1.4 million from CAFNR faculty, staff and retirees.

Gifts to the campaign in the past eight years will continue to make a significant impact in CAFNR. Campaign gifts endowed 41 scholarships and two new endowed faculty chair positions. Of the total gift amount, $46.4 million will enhance facilities and programs.

Campus-wide, alumni, friends, university personnel, corporations and foundations have given $1,038,909,621 to the state’s flagship university to fund scholarships, faculty, programs and facilities. The $1 billion campaign goal was surpassed in November, and the campaign officially concluded on Dec. 31, 2008.

The CAFNR Campaign Steering Committee was co-chaired by Al McQuinn of Naples, Fla., and Lowell Miller of Village of Loch Lloyd, Mo.

Serving on the committee were:

“The committee went above and beyond the call of duty, many working on this project for more than eight years,” said Darcy Wells, CAFNR executive director for advancement. “They wrote letters, visited friends and donors and traveled with our staff to let contributors know about the fantastic work being done at our college and what can be done in the future. Many of them were major donors themselves, demonstrating their personal commitment to the future of this organization.”

“The astounding success of the campaign is evidence that MU alumni and friends are committed to supporting the University of Missouri even during challenging economic times,” MU Chancellor Brady Deaton said. “We are deeply appreciative of the support from our donors throughout the past eight years. We will continue to build support for the university through development efforts, including the MU Flagship Scholars Program, which ultimately will provide a four-year scholarship to at least one student in every Missouri county.”