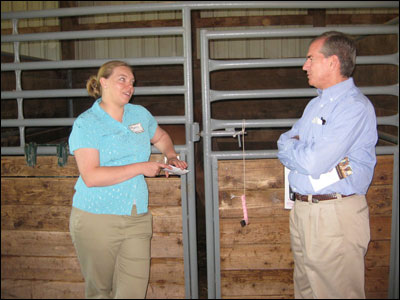 Usually, a trip to a research farm involves a long ride from main campus to the facility. When University of Missouri President Gary Forsee and Chancellor Brady Deaton visited the College of Agriculture, Food and Natural Resource’s South Farm, the trip took only a few minutes.

Such proximity is not only good for University presidents, but the researchers and students who can go from classroom and research lab to the field with just a short car drive.

“We were pleased to be able to share with President Forsee and Chancellor Deaton South Farm’s critical role in research, education, extension and economic development,” said Marc Linit, CAFNR associate dean for research and extension. “This Missouri Agricultural Experiment Station (MOAES) is a unique entity within MU and is the only state assisted, comprehensive research organization supporting Missouri’s number one industry, agriculture. Agriculture is essential to Missouri’s economy and our future growth in the life sciences. The research that occurs at South Farm has a strong economic impact on the state.” 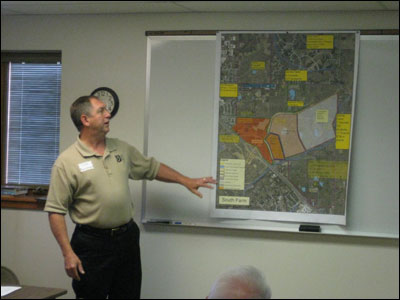 Linit pointed out that South Farm’s proximity to the MU campus makes it a valuable resource to a variety of researchers and educators.

“South Farm is not a separate and distinct facility that is hours away. It is intricately linked to research and education on campus in a wide range of disciplines from maize production to beef and swine to turf grass.”

Linit continued, “Its proximity to campus greatly enhances the effectiveness of our research resources. Curator Professor Randy Prather’s internationally recognized research could not occur without this close relationship between his laboratory and field.” 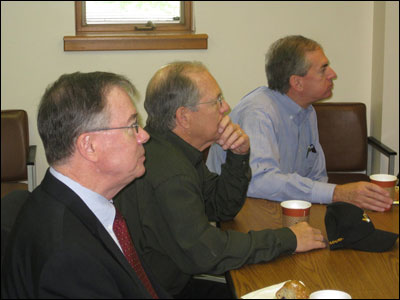 “South Farm is an extension of our classrooms on the main campus,” Linit said.

South Farm is a 1,452 acre facility south of Columbia that is home to basic and translational research and education efforts in almost every part of agriculture.

While visiting the farm, President Forsee and Chancellor Deaton had the opportunity to review the:

“The economic impact of South Farm in the cattle industry is amazing,” Linit said.  “For example, Missouri ranks second in the U.S. in cow numbers, with approximately 2.2 million head.  The cow herd in Missouri has an asset value of $2.64 billion and generates $770 million in consumable purchases in the state. The production potential of 1.9 million calves annually represents $1.14 billion in sales. The potential to discover and teach methods to enhance the value of this industry in the state is staggering.  South Farm contains the only beef research facility in the MOAES system of centers and farms that allows daily access to beef cattle by MU researchers.”

President Forsee also had the opportunity to see the work of Prather, who is co-director of the National Swine Resource and Research Center.  Prather’s major research focus is to improve reproductive efficiency in domestic animals by performing directed research in developmental biology and reproductive physiology. This work has led him to other discoveries including ways to develop a swine model for research on Cystic Fibrosis, an often fatal disease in humans.

An important location since 1930 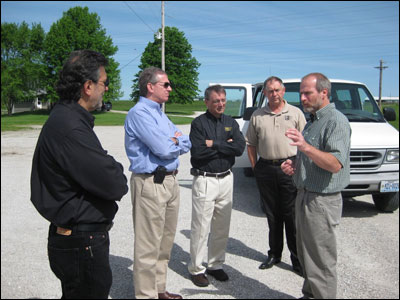 “South Farm has been an important location for CAFNR research and educational activities since the original 186 acres were purchased in 1930,” Linit said.

“What began as a small farm outside the city is now the only experiment station in Missouri that can serve the daily needs of researchers and students due to its proximity to campus.”