How do you fight a fire on the International Space Station orbiting 200 miles above the surface of the earth?

What do astronauts do to adjust the thermostat when one side of the Station is boiling in the heat of the sun and the other, in darkness, is almost absolute zero? 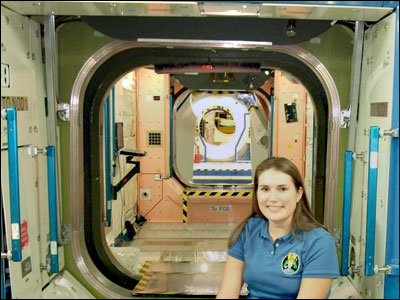 Training astronauts in these techniques is the job of Felicity Pino, NASA International Space Station environmental control and life support systems instructor and graduate of the MU biological engineering program.

Pino is currently helping astronauts who are on, or going to, the International Space Station.

Pino was born in Kansas City and moved to Columbia at age three. After the sixth grade she relocated to Jefferson City.

She earned her undergraduate degree in biological engineering from MU in 2004 before moving to Stanford University where she received a master’s degree in 2005.

So, how does a Mid-Missouri student go from the classroom to watching Space Shuttle launches and working with people who go into orbit for as long as six months?

Q. How did you come to join NASA?

A. During my sophomore year at MU, Steven Borgelt (director of undergraduate students in biological engineering and associate professor in agricultural systems management) directed me to internship options at NASA. After looking into the Spaceflight and Life Sciences Training Program at the Kennedy Space Center in Florida, I was eager to apply. I was accepted and had such a great summer experience that I applied for another NASA internship the fall of my senior year: Undergraduate Student Research Program, this time at the Johnson Space Center (JSC) in Houston.

Happy with the JSC location, I applied for another NASA-JSC internship after graduating from MU, this time through the National Space and Biomedical Research Institute. After graduating from Stanford, having focused my MS in cardiovascular bioengineering, I interviewed for a position at JSC with NASA’s Cardiovascular Research Lab. While on my interview trip, I was asked at the last-minute (by contacts I’d made on prior JSC internships) to interview for several other NASA positions, just in case. One of the last-minute interviews was for an instructor position. I fell in love with the job description, and ended up taking the instructor job, the job I have today.

Q. What are the unique technical environmental challenges in making the International Space Station suitable for human habitation?

A. Temperature inside the International Space Station (ISS) can’t be too high or too low. It’s cold outside the Station, so heaters and insulation are found throughout/around the vehicle. Equipment inside the Station is cooled by cool water lines and the cabin is cooled by air conditioners, just as we see on earth. The air conditioners provide humidity-removal and forced ventilation (not natural in space), too. Ventilation is required for proper smoke detection and air mixing.

Pressure inside the ISS can’t be too high or too low. It’s a vacuum outside the ISS, so gasses are used to pressurize the cabin air. If the pressure for some reason gets too high, devices onboard Station will automatically vent some of that pressure overboard.

Constituent levels in the Station’s cabin atmosphere (oxygen, nitrogen, carbon dioxide, etc.) have to stay within a specific range, similar to what we have on Earth. With crew breathing oxygen, having enough oxygen and not-too-much carbon dioxide in the cabin is usually the trick. Oxygen is available in high-pressure tanks on Station. It’s also created by devices utilizing an electrolysis process (creating oxygen from water). Carbon dioxide is removed from the cabin atmosphere and ultimately vented overboard.

Payloads on the ISS include science experiments that sometime need specific conditions: a purge of nitrogen on a regular basis or exposure to vacuum, for example. These are provided, respectively, by tanks of nitrogen carried onboard or valves in series opening simultaneously to expose the applicable experiment to space.

Because there is limited interior volume in the Station and limited resources (imagine living six months straight in your house without the ability to go outside), technology has been implemented to regenerate consumables. For example, urine can be processed by the equipment onboard and used to heat and serve food to the crewmembers. Urine collected is first delivered to a Urine Processor, which delivers to a Water Processor, which then delivers to a galley in the Lab module. As Astronaut Don Petit pointed out (paraphrasing), “Yesterday’s coffee becomes today’s coffee.”

Q. How do you instruct the astronauts? What are some examples of the curriculum?

A. I teach in three different settings: the traditional classroom, simulators and Space Station mockups (there’s an entire building filled with mockups of every module currently onboard the ISS). 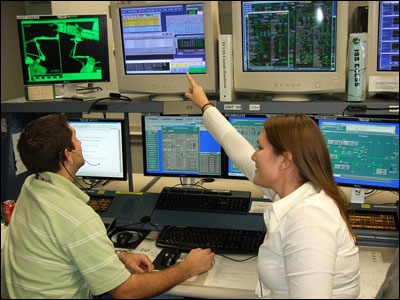 A flight controller assigned to a specific discipline (e.g., environmental control) will start out by studying information on pertinent equipment, procedures and requirements.

An astronaut, once assigned to a specific mission, will take lesson after lesson geared towards activities during his/her flight, beginning a year or more before the actual mission. Instructors ensure each astronaut has mastered training in various ways, including team (whole crew) exercises.

Q. How important is it that the astronauts know this material?

A. Proficiency in areas such as emergency response is absolutely critical. For instance, if a fire were to occur onboard the ISS, each and every crewmember needs to know precisely what to do. His/her knowledge needs to be “second-nature” or instinctive, because one can’t know in advance the circumstances that fire might create (for example, the lights on the ISS might go out, or breathing oxygen lines might be compromised, etc.).

Q. How bad would a fire be onboard the Station and how would astronauts fight one?

A. A fire could range from a small burning odor to flames. The Station is designed to be non-flammable and fire hazards are minimized in every way possible, but any time there is a power source and oxygen there is the potential for a fire. Just as in our houses on Earth, the ISS has smoke detectors throughout and fire extinguishers for crewmembers to utilize. Breathing masks (more complicated but similar to what is available on airplanes) and fire ports (to deploy a fire extinguisher in an otherwise hard-to-reach location) are available to crewmembers, as well as a variety of tools to measure gases in the air.

Q. Anything in your MU studies prepare you for this job? 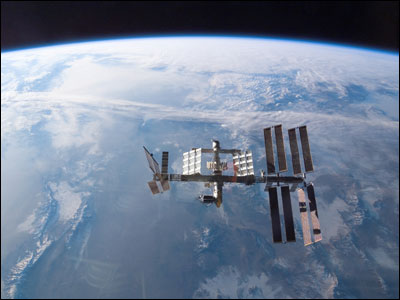 A. Chemistry classes, physics classes, thermodynamics, programming courses and classes in which presentation/teamwork skills were practiced.

Q. What do you enjoy most about your work?

A. Helping other people learn is the most rewarding part of my job. Whether the student is a flight director, astronaut, flight controller or fellow instructor, I enjoy communicating a difficult concept in a way he/she can efficiently utilize during a critical moment later.

Of course, I still get goose bumps every time I see a Shuttle launched—I love seeing the culmination of thousands of minds and countless hours of hard work. So many people put their brains to work on a separate piece of the project, and when you put it all together, it’s down-right breathtaking.

Q. Anything else that is important?

A. Advice to CAFNR undergraduate students: participate in internships whenever you can. The more you see yourself working your education outside of the classroom, the more you’ll learn about yourself—what you like, what you’re good at, and what you want. Also, make contacts everywhere you can. Having a contact in a field or company in which you want to work is the single best way—and sometimes the only way—you’ll get an interview.