With help from a new genetic device recently unveiled by a team of animal science researchers, animal breeders may soon be building betters cows that produce more and better beef and tastier profits.

A team of scientists in Missouri, Nebraska and Maryland developed the device to identify DNA markers for economically important traits in livestock, including disease susceptibility, milk production, reproduction and growth. It allows scientists to examine an animal’s entire genome to detect variations that cause trait variation in a more efficient and economical way.

Jerry Taylor, professor and Wurdack endowed chair in animal science at the University of Missouri College of Agriculture, Food and Natural Resources, and colleague Curtis Van Tassell at the Agricultural Research Service’s Beltsville Agricultural Research Center in Maryland, were members of the team that developed the new genetic identification tool for cattle, formally called the Illumina BovineSNP50 Bead Chip. 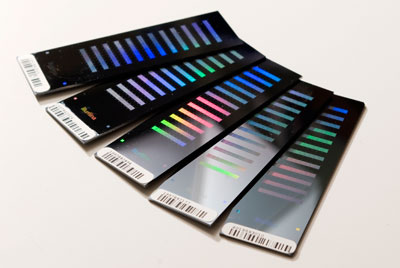 All living organisms contain DNA, the blueprint of life, Taylor said. Within the DNA are chromosomes that house neatly packaged genes. Each gene encodes a protein that performs functions necessary to support life. The genome of an organism is the complete assemblage of all of the chromosomes found in that organism.

Variations within a gene and in elements that control the expression of a gene produce differences in agriculturally important traits, such as the ability to produce more or less milk per day. Like farmers who mix and match the traits of plants to produce larger and more flavorful fruit, animal breeders for centuries have tried to minimize bad traits and maximize good ones through selective breeding. Though breeders have made tremendous strides, without a precise and definitive genetic road map, the process has been somewhat hit or miss.

These genetic variations can be monitored by other differences that lie close by on the same chromosome. Single nucleotide polymorphisms (SNPs) are very useful for this purpose because hundreds of thousands of them can be packaged into a single assay, Taylor said. A SNP is a change in a single location in the DNA structure. Each SNP provides an indirect measure of the nearby genetic variants.

The new bovine assay easily and quickly identifies regions within the bovine genome that harbor variants that cause animals to differ in the outward expression of important traits, allowing scientists to predict an animal’s total genetic merit from its SNP profile.

The dairy breeding industry is already using the chip to guide the genetic selection process of milk-producing animals.  As a result, the industry is saving millions of dollars annually by more efficiently prescreening young bulls and streamlining the process of identifying elite cows. Artificial insemination companies base these decisions on each animal’s genetic merit, as estimated from their SNP profiles.

The new SNP-chip will primarily be used by beef producers. Large populations of beef cattle have already been assembled and genotyped to develop models to predict their genetic merit for feed efficiency, growth and carcass composition, Taylor said. Populations are also being assembled to allow the development of prediction models for health and fertility traits.

“Application of this research to the beef and dairy industries, and eventually the use of comparable tools for the swine and sheep industries, will forever change selection programs in livestock. In addition, these tools are rapidly expanding the understanding of the genetic control of economically important traits in all domestic livestock species,” Taylor said.