A dedicated teacher and administrator at the University of Missouri College of Agriculture, Food and Natural Resources was honored on March 12 with the dedication of the Paul Vaughn Conference Room in Gentry Hall.

The room is designed to keep alive the memory of Vaughn who died in June 2008.

Friends and colleagues from across the nation discussed his career and life accomplishments via an Internet conference during the ceremony.

Vaughn was associate dean and director of academic programs for the college. 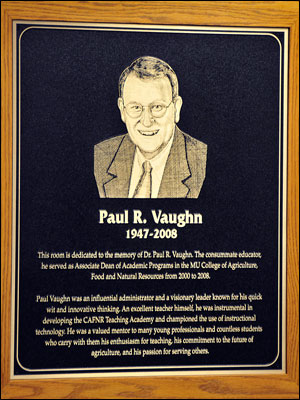 Known for his leadership

He was known for his leadership in academic programs at MU and his contribution in several national educational organizations, from the FFA to the National Association of State Universities and Land Grant Colleges.

“Paul created so many things to exceed folks’ expectations when it came to education,” said Thomas L. Payne, vice chancellor and dean. “Paul was recognized nationally and internationally for his excellence in, and commitment to, higher education. He and Lanette welcomed students, faculty and staff into their home for so many fun times. They were the essence of the ‘family’ in CAFNR. And, he was loved for his sense of humor, often poking fun at himself.”

Recognized for his commitment for teaching 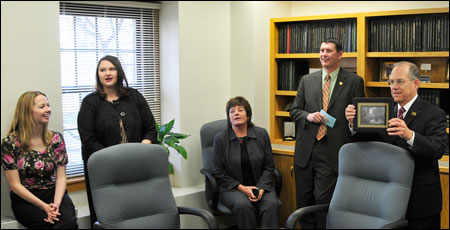 A recipient of numerous awards, Vaughn was recognized for his commitment for teaching and his administrative performance.

In 1998, he was selected by the USDA as one of the top ten teaching faculty in the U.S.

Some of the more than 40 organizational awards and honors he received include:

Some of his service accomplishments included:

Vaughn authored or co-authored more than 70 publications, including several texts for high school and university students. He received funding for 24 projects totaling more than $1.35 million.

In 1998, he spent a month in Sana’a, Yemen as a consultant for the Center of International Development where he assisted with the development of B.S. and M.S. degrees at the University of Sana’a for students who want to teach at two-year postsecondary institutions.

He also led a trip for National FFA Officers to study agriculture and education in Japan, Hong Kong and the People’s Republic of China.