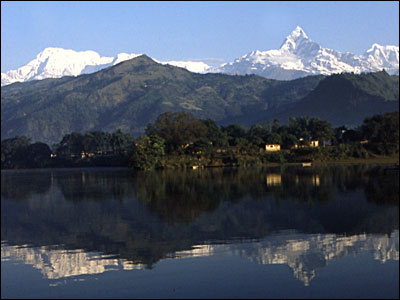 The economy around three interior lakes in Nepal has changed dramatically since the efficiency of cage fishing there has improved. Photo courtesy John Jones.

For the poor living in central Nepal, it was a struggle to get enough protein. With their meager daily pay of a dollar, they couldn’t buy the fish swimming in the country’s interior lakes.

To produce more fish, the government encouraged cage fishing. Cage culture—like raising chickens in coops but under water—began in 1972 in Nepal’s Pokhara Valley at Lakes Phewa, Begnas and Rupa.

Today, the Nepal interior economy is thriving because of a small, but significant, change in production technique. Families not only have food, but a surplus to sell for cash. Tourists flock to the area to sample the catch, bringing in more money. All that was needed was a little science from a University of Missouri aquatic ecologist.

In 1985 Jack Jones, now the Dunmire Professor of Water Quality in the University of Missouri College of Agriculture, Food and Natural Resource’s Department of Fisheries and Wildlife Sciences, wanted to add an international component to his emerging career. He noticed Nepal’s developing aquaculture and thought his expertise could help. With a National Science Foundation grant, he traveled to the country between Tibet and China.

An expert in limnology, the inland version of oceanography, he saw problems. There was a shortage of fingerlings to stock the lakes and the rural families who farmed the fish, one of the lowest of the country’s castes, couldn’t afford feed pellets. They relied on naturally-occurring plankton for the fish to eat—an iffy thing.

Jones set up shop in a stone building and collected data. Teamed with fellow scientists from the Integrated Fishery and Fish Culture Development Project, part of the United Nations Food and Agriculture Organization, he saw a puzzling fact. Cages on one lake yielded twice the bighead and silver carp.

To find the secret, he investigated those things that promote healthy fish—temperature, food, water oxygenation and sunlight. While the scientific variables were complex, graphs showed the optimum cage location was not just under the surface, as commonly done, but a few feet deeper where oxygen, light and naturally-occurring algae were close to prefect. 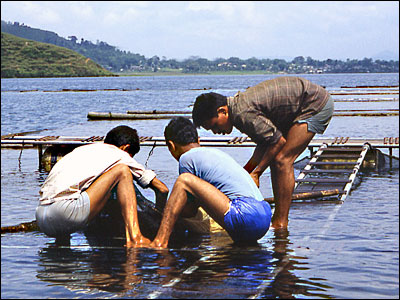 Moving cages to this depth was simplicity itself—the farmers merely tipped their 15 x 6-ft. cages into a vertical position. The fish easily swam to their best depth.

It didn’t take long to see results.  Jones and colleagues inspected the horizontal control cages and found the expected growth of fish.

The vertical cages, by contrast, teemed with dramatically larger and healthier carp. The initial count showed a doubling of fish growth.

“We let out a war whoop,” Jones said.  “Word got out almost overnight and the other families began switching their cages to the vertical position.”

The excitement was justified. Nepal is among the world’s poorest and least developed countries with almost one-third of its population living in poverty. Primitive agriculture is the mainstay of the economy, providing a livelihood for three-fourths of the population and accounting for almost 40 percent of gross national product

Its population of less than 30 million, according to the CIA Fact Book, has a median age of less than 21 years. It’s young because most of the population dies before 60.

Yet, it is rich in interior lakes where some 186 fish species thrive, which is why the government invested in cage fishing. Approximately 400,000 hectares of water are available for aquaculture development.

“By driving fish production up you drive down price,” Jones said.

It didn’t take long for the additional fish to start a chain reaction, according to the Asian Fisheries Science journal. Jobs that supported fishing, such as net mending, began to emerge. 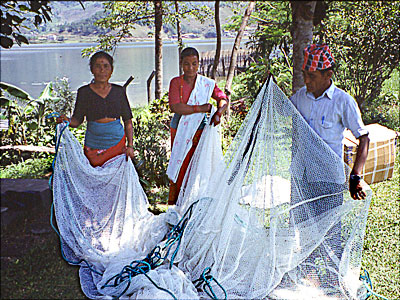 Bankers happily financed new ventures because no investment for feed is needed and families use homemade cages that last for years. Plentiful fresh fish attracted tourists who further boosted the local economy.

The Nepal government stepped in with fish marketing, training and technical help, including a new fish hatchery to meet the demand for fingerlings.

Today, reports the fisheries journal, one family can operate a five-cage system that adds 9,000 to 14,000 Nepali rupees ($6,300 to $10,000) to their annual income—an enormous boost in a country where the average annual household income is still under $300 per year.

The Nepal Directorate of Fisheries Development reported a national production of 33,270 metric tons of fish in 2001. Cage fishing is beginning to dominate the country’s aquaculture as traditional fishing declines.

The fish harvest has also changed a largely landless people to a home-owning one with houses with toilets, gas stoves and TVs. Some can buy a motorbike.

“Now, fish farmers own farmland and are sending their sons and daughters to college,” Jones said. “The caste now boasts its first college graduate. Before, the kids were sent overseas to oilfields for hard work and to send money home.” 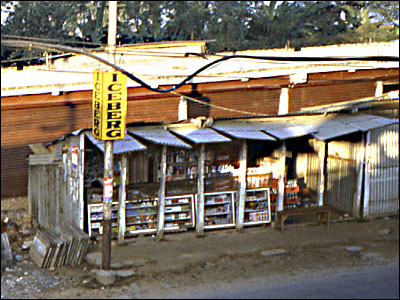 In a recent visit, Jones noted what the added tourism has brought. An open air market with decrepit lean-to shanties was supplemented by a Nepali version of a strip mall with wine bar, grocery store, ATM and underground parking.

His Nepali acquaintances, once undernourished, now carry a little extra weight, he said.

The Himalayan Journal of Sciences noted that a community known as the “Pode,” living near Phewa Lake, led a nomadic life along rivers and lakes, carrying cast nets to feed their families. In the 1960s when the fish catch declined due to overfishing, the Pode bought one cage.  Today, they’re sending their children to school.

In 2000 in Nepal, according to government information, about 142,000 males and 223,000 females are involved in fisheries—up from the 1980s when about 80,000 people depended on fish. Cheap start-up costs mean even the poorest Nepalese can cage fish. As fewer than half of the population is literate—a situation worse among the lower castes—any job skill taught via on-the-job training is particularly prized.

For Jones, his two decade project has come full circle. He recently was honored as a Senior Fulbright Fellow at the Nepal Agriculture and Forestry University in Rampur. There, he’ll collaborate with the next generation of scientists looking at ways to make cage aquaculture even more efficient.