In his off-hours, he helps detectives solve criminal cases.

The associate professor is a member of a joint venture between the University of Missouri and the Paternity Testing Corp. (PTC) that seeks to revolutionize forensic work relating to rape cases. 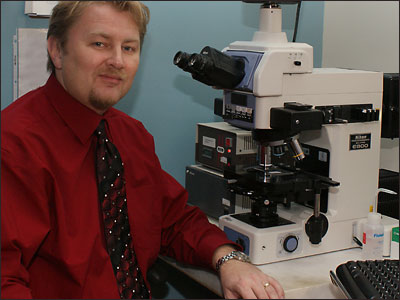 Sutovsky is one of a handful of researchers working toward marketing a device, called a QuantAssure cassette, that would allow law enforcement and laboratory scientists to determine within minutes whether a piece of evidence or a swab from a rape kit contains sperm and semen.

This is vital information for collecting and analyzing DNA used to prosecute criminals.

Current methods of sperm detection in forensic labs can take hours to turn up a definitive result—time that can slow processing of evidence and limit the number of cases that can be processed by an analyst.

The project started around 2005 when Kim and Joe Gorman and Michelle Beckwith of PTC attended a Columbia Scientific Partnership and Resource Connection meeting discussing laboratory research and entrepreneurship. There they met Sutovsky who, in collaboration with Spanish scientist Antonio Miranda Vizuete, was displaying a protein that he has isolated and found only in sperm cells.

Kim realized that Sutovsky’s research could be modified to quickly find sperm without looking under a microscope. True to the intention of the meeting, entrepreneurship and science began collaborating.

Sutovsky and PTC co-director Christian Carson began studying the protein and determined that it could be used as a sperm detector. They decided to focus on a simple and easy-to-use device much like a simple pregnancy test that forensic health care specialists can pull off the shelf. The resulting device identifies the presence of the protein, which also indicates the presence of sperm.

Sutovsky, Miranda Vizuete and the others filed federal patents on the device. Sutovsky already holds three other U.S. patents and was recently recognized as the inaugural recipient of the USDA-NRI Discovery Award. To develop the science and test it to meet legal standards, the team recently received a $360,000 grant from the National Institute of Justice.

Sutovsky and PTC hope to have the device ready for market within a year. Sutovsky earned his master’s degree in animal science in 1989 from the Slovak Agricultural University, Nitra, Slovakia. He earned his Ph.D. in physiology of reproduction from the Institute of Animal Physiology and Genetics, Czech Academy of Sciences, Libechov, Czech Republic, in 1994. He accomplished his post-doctoral work at the University of Wisconsin and was staff scientist at the Oregon Health & Science University before coming to MU in 2001.

Kim Gorman is a former DNA criminalist from the St. Louis Metropolitan Police Department. She worked at Washington University on the initial research for the Human Genome Project.

The device may have another use that could put a lot of undetected criminals behind bars. The new cassette can expedite screening of rape kits. There are tens of thousands such kits sitting on shelves in crime laboratories nationally that have not been analyzed because there wasn’t a specific suspect to compare the DNA with.

The new cassette could quickly detect sperm in a rape kit, which could then produce a DNA profile that could be compared to DNA profiling on all felons kept in the FBI’s national database. Missouri has been profiling convicted felons since 2005.

With the nationwide register of DNA growing rapidly, the cassette may be instrumental in expediting the processing of cold cases. With a continually growing number of convicted felon DNA profiles in the database, Missouri could make all sorts of connections to men convicted of other crimes.

Not a bad day’s work for a part-time detective.