When it comes to wine, the Norton grape has its admirers. But qualities other than taste are bringing Missouri’s state grape to the attention of science. University of Missouri researchers, together with scientists at Missouri State University and the Donald Danforth Plant Science Center in St. Louis, are investigating the genes that make Norton grapes resistant to fungal pathogens that can plague other varieties of wine grapes. 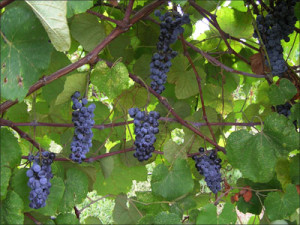 Norton is a very special grape, said Walter Gassmann, a plant pathologist with the Interdisciplinary Plant Group at the University of Missouri. “Missouri is hot and humid, perfect conditions for fungal pathogens, and yet this grape variety thrives here.”

A cultivar of Vitis aestivalis, Norton’s unique ability to defend itself against fungal diseases has been known for some time. How exactly it is able to defend itself, however, is what Gassmann and his collaborators are hoping to discover.

“We’re using this native grapevine species to understand innate immune systems of grapevines against fungal pathogens,” said Gassmann, who is faculty in the CAFNR Division of Plant Sciences and also an investigator in the Christopher S. Bond Life Sciences Center. “We are particularly interested in this grapevine’s ability to defend itself against powdery mildew, a devastating fungal pathogen that affects wine production worldwide.”

To do this, the research team is using a number of genetic techniques to study the genes that enable Norton grapes to both resist and defend itself against powdery mildew. Another aspect of the research will focus directly on identifying the function of genes that makes V. vinifera, the grape species used to produce most of the world’s wine, susceptible to powdery mildew.

The project, “Vitis Gene Discovery Program,” recently received $420,000 in funding from the USDA. The collaborators on this project are Wenping Qiu, Laszlo Kovacs and Paul Durham from Missouri State University and Daniel Schachtman at the Donald Danforth Plant Science Center.

“Norton is also unique in that it shows an enhanced level of resistance that is very difficult for a pathogen to overcome,” explained Gassmann. “Its resistance appears to rely on a combination of defense mechanisms, rather than on a single immune receptor that recognizes a particular protein in the pathogen.”

The scientists hope to eventually transfer the genes that comprise these defense mechanisms in Norton into cultivated grapes to develop new disease-resistant varieties. The ability to introduce individual genes or gene components into V. vinifera will be an important advance for grapevine breeding programs worldwide.

“People are very particular about what they think their wine should taste like, so any breeding efforts to get resistance or any other advantageous agronomic trait into grapevine is always coupled with the problem that the grape flavor changes,” said Gassmann. “By identifying the specific genes that give Norton its robust defense mechanism, our goal is to provide breeders with a way to speed up and specify the breeding process without changing the quality or taste of their grapes.”

This approach also will have a positive impact on the environment by reducing the use of fungicides, which breeders and vintners currently rely upon to protect their grapevines from various maladies.

As part of the project, the research team also is studying the biological activity of grape polyphenols, such as resveratrol, on the animal nervous system. These polyphenols are responsible for the health benefits usually conferred by grape and wine consumption. The skin of Norton grapes is known to have higher levels of polyphenols than other purple cultivars. Since plants produce compounds such as polyphenols as anti-microbials, it is likely that the production of polyphenols by Norton grapes benefits both plant and human health.

Ultimately, Gassmann hopes the results of this project will help to refocus national and international attention on this important domestic resource.

“Not many people know it, but Missouri was the second most important wine producer before Prohibition,” said Gassmann. “We’re still recovering from that period, but the tradition is still here. I’d like to hope that, in the long run, we can broaden the grape industry here in Missouri by producing grapevines that actually grow well in this climate.”