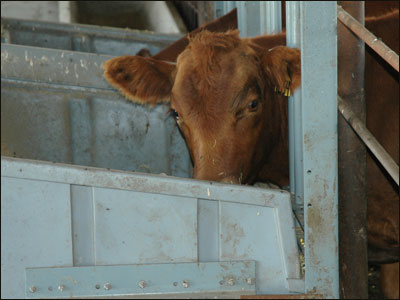 Escalating feed and fertilizer prices have eroded profitability in the beef industry nationwide. With over 54,000 beef operations and the second largest beef herd in the U.S., Missouri stands to lose a lot.

Researchers at University of Missouri’s Southwest Center near Mt. Vernon, Mo., have found how many pounds a cow gains per pound of feed consumed varies between animals.

On average, the most efficient animal in a typical herd eats 20 percent less than her inefficient counterpart. By selecting for this genetically inherited trait and breeding accordingly, producers can raise the same number of cattle but pay less for feed costs.

The economic results of this research are equivalent to every fifth cow virtually eating for free, said Robert Kallenbach, associate professor of plant sciences in the MU College of Agriculture, Food and Natural Resources. The financial impact of the research could be huge.  “Even if only one-fifth of cattle producers in Missouri were to adopt the technology, the savings on an annual basis would be about $120,000,000,” Kallenbach said.

Over the past three years, feed prices have more than doubled. “A lot of factors contribute to the increase, including use of grains for biofuels, worldwide food demand, and a weak dollar which makes US grain exports comparatively cheap,” Kallenbach continued.

Monty Kerley, professor of animal science, Kallenbach and other MU researchers determined which animals had the efficiency trait and then bred them into a prototype herd to make sure the beneficial results stayed with the animals across generations.

The researchers tracked a measurement called residual feed intake, or RFI for short. To measure RFI, each animal is given an ear tag equipped with a tracking device upon arrival at the Center.  Whenever an animal went to the feeding bin, a receiver on the bin registered when the cow was eating.  The bin was weighed before and after to see how much feed the cow ate.

This allowed researchers to measure each cow’s daily RFI, Kallenbach said.  “This is really top of the line technology we are using,” said Kerley. “We are the first people to have an intake system like this in the United States.”

Parallel with the genetics research, Southwest Center investigators are also measuring the efficiency of cattle when they are grazing in the pasture. “We want to see if cattle selected for efficiency in the feedlot are also efficient when they are fed forage,” said Kallenbach.

To measure pasture efficiency, researchers analyze internal and external markers from manure to see how much forage was consumed.