Despite being battered by the remnants of Hurricane Ike, an experiment to grow rice under center-pivot sprinkler irrigation yielded as much or more of the grain as conventional methods.  This new technique may allow farmers to produce the crop in areas where it cannot be grown now, helping produce more food for a hungry world. 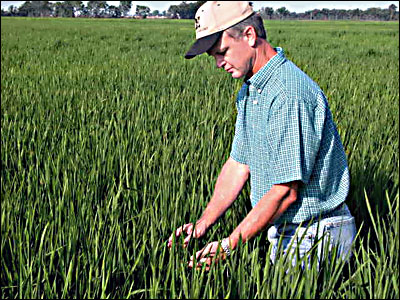 Gene Stevens, an extension associate professor in the Division of Plant Sciences at the College of Agriculture, Food and Natural Resources, University of Missouri, is using a staple of Midwestern farms, center-pivot irrigation, to develop a new way of growing rice.

He and his team want to determine what irrigation, fertilizer and herbicide methods are needed to grow the grain without flooding fields, the traditional method.

The program began in Spring 2008 when the world woke to headlines describing a global rice shortage.  The news was grim for that half of the world that relies on the grain as its primary food staple.  When price increases rapidly exceeded 50 percent, people in poor nations like Haiti rioted over the higher costs.  Some estimates indicate a continuing 3.5 percent shortfall in the food.

The researchers at MU’s Delta Research Center in Portageville planted two rice varieties and one rice hybrid with several combinations of irrigation, fertilizers and herbicides to see which programs worked best under the overhead watering system.

In October, they harvested test plots. The one with the best fertilizer and weed control program averaged 175 bushels, a good yield. Other test results ranged from poor to moderately-good.

This year’s results will give the researchers important baseline information for next season’s experiments that will refine planting, fertilizing and weed control methods.

One critical test was weed control.  In conventional rice growing, flooding fields helps drown unwanted weeds such as pigweeds.  The researchers tried various brands and amounts of herbicides.  Of the 46 herbicide combination tested, four types stood out as being most effective.

Types and amounts of fertilizers were also compared.  Their test found that a total of 135 pounds of nitrogen fertilizer per acre produced optimum yields if applied as a liquid via fertigation over a five-week period.  When the nitrogen was applied made a big difference.  This discovery is an important one in perfecting the entire center-pivot concept, Stevens said.

Another main purpose of the experiment was to see how little water is needed to grow a given amount of rice.  Initial results indicate that almost 30 percent less water was used with the pivot irrigation system than conventional flooded field methods.

The researchers also found other important aspects of growing rice underneath the sprinkler system.  To cope with Missouri’s gooey clay soils, for example, it may be necessary to use more than two tires on each sprinkler unit to prevent making deep ruts in the field and getting stuck.

Test results were skewed by bad weather.  Heavy rains and winds left over from Hurricane Ike went through southeast Missouri in mid-September and caused up to 50 percent crop losses in some area rice fields.  The farmers were seeing good yields before strong winds “shattered” the maturing seeds.  The Delta Center weather station reported gusts of almost 50 mph as the storm passed.

Stevens estimates that the storm destroyed about 30 bushels per acre.  The fact that best fertigation plot yielded a good harvest under these conditions bodes well for the concept, Stevens said.  It may have produced 200 bushels per acre, otherwise.

Center-pivot irrigation employs a quarter-mile-long sprinkler arm that rotates around a pivot.  Viewed from an airliner, the device creates distinctive circular crop patterns.  It is extensively used in states such as Nebraska to irrigate corn.

The sprinkler arm is fed with water from the pivot point at the center of the circle.  Wheels set the master pace for the rotation, typically once every three days.

Stevens and his colleagues also looked at ways to make center-pivot irrigation economically viable.  They monitored soil moisture levels so that water is applied only when needed.

Center-pivot irrigation also promises to reduce labor.  Hours of work are required to construct levees and install flood gates for flooding rice fields each year.  The overhead system also helps the farmer practice minimum tillage that can lead to reduced runoff and greater soil productivity.  Crop rotation and minimum tillage bring organic material back into the soil and reduce the high levels of compaction that comes from years of growing nothing but rice.

Center-pivot irrigation can increase the amount of land in production, too.  Most soils in Missouri, for example, do not have enough clay content to maintain flood water for rice production.

In the U.S., more than 100 varieties of rice are commercially produced.  Missouri is one of six states along the Mississippi River that can produce the product.  In 2006, domestic rice production was valued at $1.88 billion, approximately half of which was exported. The U.S. provides about 12 percent of rice that moves in world trade.

Almost 60 percent of domestic utilization of U.S. rice is direct food use, while 16 percent is used in processed foods and beer. The remaining 10 percent goes into pet foods.  The Anheuser-Busch Brewery in St. Louis is the largest consumer of rice grown in Missouri.