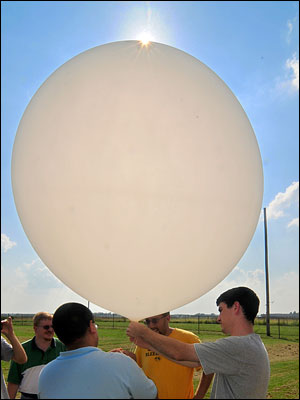 Meteorologists know a lot about summer thunderstorms that are caused when warm and moist air heated by the sun rises into colder air at higher altitudes. Thunderstorms that occur at other times of the year, triggered by weather fronts that lift warm air into colder and stable air aloft, are not as well understood.

In a research and educational project to understand how non-summer thunderstorms are triggered by a process called elevated convection, Patrick Market, associate professor of atmospheric sciences at the University of Missouri College of Agriculture, Food and Natural Resources, will lie in wait for these cold and warm fronts to roll across Columbia, Mo.

Then, he and his students will launch weather balloons before, during and after the weather event to get a clearer look at what the atmosphere is doing.

These balloons, and the radiosondes strung under them, will continuously radio temperature, wind direction and velocity, humidity altitude and location back to the team. This information, coming from different locations around the front, will give the researchers a more precise look at the dynamics that cause these storms to grow, mature and die.

Market said it is important to understand these kinds of thunderstorms as they are some of the most prodigious rainmakers around. In Columbia in 1996, a boundary layer T-storm dumped 19 inches of rain on the city, creating flash floods. A similar event in 2006 dropped 15 inches in just a few hours. 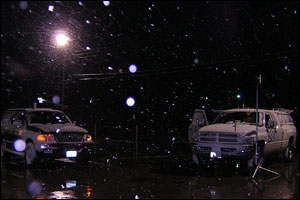 The chase vehicles at ground zero early in the night as snow starts falling.

In winter, elevated convection thunderstorms can result in thundersnow.

Thundersnow is a thunderstorm that can produce dangerous amounts of ice and snow, as well as thunder and lightning.

It is rare that researchers get a weather balloon into elevated convection conditions. Missouri has only one weather station that launches the craft, and then only twice a day at predetermined times.

MU’s weather balloons will be launched when radar and other methods show that an elevated thunderstorm event is approaching.

The balloons will then travel upward through the rising layer, showing how rapidly the storm is growing, how much energy it contains and how much moisture is available. 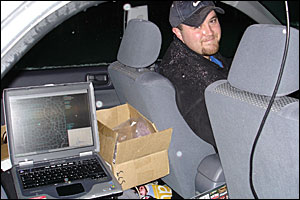 The chase vehicle reaches its destination. The computer runs the mobile lightning detector.

Balloons can reach altitudes as high as 16 miles high

By passing through the tops of the elevated convection, the researchers will be able to determine its vertical dimensions. The balloons can reach altitudes as high as 16 miles high—above almost even the strongest storm’s characteristic anvil top.

The student meteorologists will capture and analyze the data. As such fronts with the characteristics needed are fairly rare, Market thinks that it will take 4-5 years for enough data to be gathered.

Market expects to see the elevated convection phenomena occur along a warm front, which acts like a wedge, acting like an upended scoop shovel, with the thinnest end at the front. 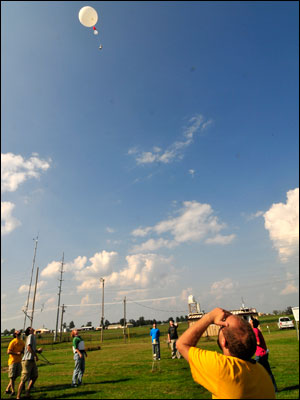 When a cold front is involved, warm air near the surface is lifted upward. A warm front will take cold air and push it higher into the atmosphere. The resulting instability can trigger a thunderstorm.

Where and under what circumstances these thunderstorms develop as they ride up on the wedge is of keen interest to meteorologists.

Predicting thunderstorm development in these situations can be tricky as storms can occur 100 miles before and after the actual front, depending on how powerful the convection and available moisture and energy.