With suicide bombers, improvised explosive devices and combatants wearing civilian clothes, the wars in Iraq and Afghanistan are unlike previous conflicts that Americans have had to fight.  To better prepare current and future Marines against these threats, it is imperative that the U.S. military systematically collect, evaluate and distribute the hard lessons learned on the battlefield. 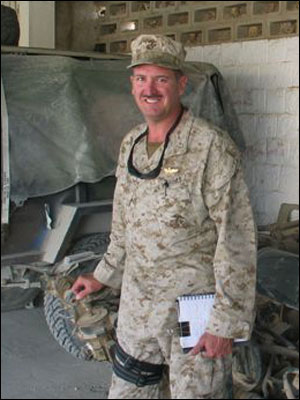 Since 2003 when he was called back to active duty, Col. Monte Dunard, a 1980 agricultural economics graduate of the MU College of Agriculture, Food and Natural Resources, has been leading the Marine Corps Center for Lessons Learned (MCCLL).

In this job, Dunard takes details from the successes and failures from the battlefield, hands them to his staff of experts who assess the data, then distributes the analysis to everyone from the company cook to war planners in the Pentagon.

The subjects of this research can range from evaluating the performance of bullets in an urban environment to the best maintenance practices to keep helicopters available for missions.  Sometimes, the work involves creating a book reading list to help marines to better perform their tasks.

Dunard also evaluates the ways Marines respond to U.S. and foreign natural disasters.  Like the battlefield data, the lessons learned can lead to changes in doctrine or equipment used.

After he graduated from CAFNR, he earned a master’s in Strategic Studies at the U.S. Army War College in 2004.  His civilian job, which he will soon return to, is flying international routes for American Airlines.

In 2007, Dunard received the prestigious Federal 100 award as one of the top information technology people in the government.  The MCCLL won the Secretary of the Navy’s Safety Excellence Award for work in preventing mishaps in combat and training.  MCCLL also earned one of five Department of Defense IT achievement awards.

Information assessed by the MCCLL gets to the people who need them in a variety of ways, mostly online.  A searchable database allows officers and enlisted men to check out issues encountered and solved by others before them.  A Daily Digest pushes practical information out to the troops almost as soon as it is learned.  A classified weekly report analyzes tactical, cultural and strategic issues so Marines keep in touch with the larger mission.  A newsletter that discusses specific problems encountered and solved is e-mailed to approximately 130,000 Marines, Department of Defense personnel and interagency organization such as the State Department, FBI and USAID.

“Technology is a tool we use to complete our mission,” Dunard said. “We have an outstanding information technology department that writes software, sets up networks, designs Web sites and keeps us secure.  We could not do our job without this technology advantage.”

This system not only communicates information, but quickly collects, processes and categorizes statistical data, too.

“We use online survey tools so we can efficiently survey thousands of Marines and get quantitative data for what they think on gear, equipment, training and many other topics,” Dunard commented.  “We push our analysis through our newsletter and reports out to a wide audience and we use our own network to keep it immediately accessible to the folks who need the information.  This is knowledge management and a key means that we avoid having information sitting on some bookshelf and unusable.”

Col. Dunard recently returned from a deployment, his fourth, to Iraq where he helped compile and analyze recent lessons learned there.  He jokes that his primary weapon is an ink pen and notebook.  He also met with coalition allies to improve counter-insurgency responses in other areas there terrorists operate.

“While it is difficult to prove, the MCCLL believes the changes we have helped bring into existence have saved the lives of our soldiers, sailors, airmen and Marines as well as reduce the collateral damage,” Dunard said.  “We have also improved our capability to support civil authorities here in the states and around the world to better cope with natural disasters.”

In Iraq where the Improvised Explosive Device has been used with devastating consequences, the MCCLL learned that having a wide range of military vehicles help save Marines’ lives.  When the enemy suddenly changes his tactics, U.S. commanders can respond by deploying the vehicles whose characteristics best meet the new threat while sending vulnerable machines to safer areas.

Safety is another importance area of the MCCLL’s work.  Vehicles up-armored in the field can often can have odd handling characteristics, sometimes rolling over.  To help drivers avoid problems, MCCLL compiled the circumstances of each accident, looked for common denominators, and then recommended changes to the existing training and safety programs.  Another effort advised gunners riding on the tops of Humvees how not to get tangled in the numerous overhead electrical and telephone wires that are unique to Iraqi cities.

The lessons learned do not always involve warfighting directly.  MCCLL recommended that certain helicopter units switch to contracted maintenance.  This improved helicopter utilization rates in Iraq, something that had an indirect, but positive, impact on Marines in the field.

“Ever better cultural awareness has been one of our big topics,” Dunard said. “Marines must have the ability to work with the native people, understand their culture and correctly interpret every movement.  This knowledge in a convoy or a combat patrol is a resource that can help out greatly in the future. For example, one of the more effective ways of defeating improvised explosive devices is working with the people, building trust and confidence with them, so you will be alerted to what might be a hot spot.”

Many of the implemented lessons learned are deceptively simple and easily overlooked. A spell checking feature in after-action reporting software helped improve accuracy and eliminated potential misunderstandings in reports.  The MCCLL also developed a book reading list for Marines to help them better cope with different cultures and improve their leadership skills.  In addition to expected books like the Marine Corps Doctrinal Publication (MCDP) 1 (Warfighting), were A Message to Garcia by E. Hubbard—the most widely read book among Marines who found it useful in their professional development.  We Were Soldiers by H. Moore and Band of Brothers by S.E. Ambrose are other popular selections that help current Marines cope with the psychological stresses of war.

Was there anything in his CAFNR education that helped him prepare for this job?

“I think the undergraduate degree in agricultural economics is one of the best degree programs going in science, math, biology, engineering, marketing, economics, law and communication,” he said. “I have used my Mizzou degree throughout my Marine Corps and American Airlines careers.”