Cystic fibrosis, an inherited chronic disease that affects the lungs and digestive system of about 30,000 children and adults in the U.S., has been a difficult disease to study as there are no effective animal models that mimic the human condition.

That changed recently because University of Missouri and University of Iowa researchers can now produce pigs born with CF that have the exact symptoms of a newborn human with the disease.

Announced in the journal Science in late September, the scientists said they created genetically engineered piglets with the same mutation that causes cystic fibrosis in people.

Currently, researchers use rat models to study the disease.  This work produces poor data as rodents do not display the same symptoms as humans.  Pigs do not normally have the mutation that causes CF, but their respiratory makeup makes them perfect research stand-ins for humans. 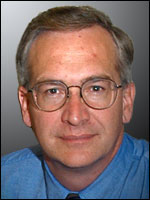 “That’s why these new swine models are so important,” said Randy Prather, distinguished professor of reproductive biotechnology in the MU College of Agriculture, Food and Natural Resources and who helped develop the swine model. “We have been able to get pigs through the initial stages of the disease, which they display just like humans, and now we are just waiting for them to grow and potentially develop the lung disease so we can start experimenting in ways that have never been possible.”

Prather collaborated with Michael Welsh of the Howard Hughes Medical Institute at the University of Iowa. To create the genetic defect in pigs, a team led by Welsh made genetic modifications in pig cells. Prather’s group then generated the genetically modified pigs from the cells using a process known as nuclear transfer. The pigs that were produced carried only one copy of the mutated gene. Prather bred the pigs naturally and now many piglets have been born with CF.

Once a litter is born, the piglets are immediately flown to Iowa where physicians who perform the corrective surgery on human newborns with CF do the same for the pigs. Meanwhile, MU researchers perform analysis during the transit to determine which piglets have the mutations.

“So far, all the mutations in the pigs have exactly mimicked the problems in humans born with CF,” Prather said. “The whole cellular physiology of the pig is similar to humans. That’s why having this breakthrough model is so exciting for the potential it has to move research on cystic fibrosis forward.”

The researchers established that piglets develop the same disease characteristics that are commonly seen in newborn humans with CF, including a bowel obstruction known as meconium ileus, which often is the first sign of CF in humans. The pigs also have an abnormal pancreas, liver, and gall bladder, similar to patients.

In the study, the lungs of the newborn CF pigs appear similar to the lungs of their normal litter mates and have no sign of infection or inflammation, possibly shedding some initial insight on the process. As the CF pigs mature and are exposed to airborne bacteria and viruses, the researchers hope to learn more about how and why lung disease develops in patients with CF.  CF afflicts 70,000 people worldwide.

People get CF when they inherit two mutated copies of a gene called CFTR, which was pinpointed as the cause in 1989.  The defective gene and its protein product cause the body to produce unusually thick, sticky mucus that clogs the lungs and leads to life-threatening lung infections; and obstructs the pancreas and stops natural enzymes from helping the body break down and absorb food.

A primary cause of death and disability in patients with CF is lung disease. However, many questions remain about how infection and inflammation causes that damage.

In the 1950s, few children with cystic fibrosis lived to attend elementary school. Today, advances in research and medical treatments have further enhanced and extended life for children and adults with CF. Many people with the disease can now expect to live into their 30s, 40s and beyond.

This is the latest example of pigs used for human medical needs. For example, cardiac patients can get pig heart valves.