Life aboard a U.S. Navy ship can be grueling with deployments of up to eight months at sea.  A great meal can help make life better for the sailors.

Greg Chase, a 2007 graduate from the MU Hotel and Restaurant Management (HRM) program and former sous chef for the Walt Disney World Resort Polynesian Resort in Orlando, stepped in to support. 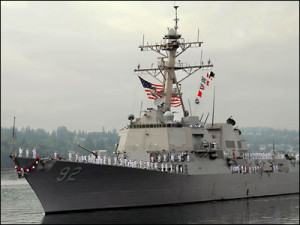 Earlier this year he volunteered for a two-week voyage on the USS Momsen (DDG 92) to add new dimensions to the menu and teach onboard chefs tricks to make meals at sea more enjoyable.

The Momsen, a 9,000-ton Arleigh Burke-class guided missile destroyer, serves with the Pacific Fleet. It has a crew of 23 officers and 300 enlisted ranks.  Chef Chase’s effort was part of the U.S. Navy’s Adopt-a-Ship program.

Adopt-a-Ship started in 1998 as an initiative to send professional culinarians, chefs and cooks to afloat and shore commands to provide continuing education in culinary arts to Navy culinary specialists. Top chefs from all over the nation volunteer to teach skills such as service and presentation, meal preparation and fundamental culinary techniques to augment and enhance Navy culinary training.

Chase got involved in the program as a CAFNR senior when Chef Leslie Jett, resident instructor, coordinated MU-sponsored trips onboard the USS Rushmore (LSD 47). “This was a Thanksgiving trip and a great experience,” Chase said.  “I was inspired to continue working with the Navy and their programs.”

Chase has actually served twice aboard the Momsen and once on the USS Farragut (DDG 99).

In 2007, Chase, a St. Louis native, was team captain of the Mizzou BBQ Team that made a name for itself in a national cooking competition with the creation of the “Tiger Steak.”

The team finished second in the national competition.

Crew needs meals around the clock 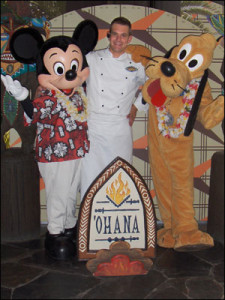 Chase said the greatest challenge was feeding a large crew around the clock. “There are meal periods going every few hours, 24 hours a day,” he said.  “In addition to this, you are cooking for a large quantity of crew members, so time management and organization skills are key skillsets. The Navy has a very organized system for menus and recipes, and the commitment of the culinary specialists truly brings the meals to life for the crew.

“It truly teaches you about working with teams,” he continued. “I was able to truly grow from those opportunities which made me to be a better leader for my teams.”

“I am now a resort guest service manager for Walt Disney World.  Working for Disney has been just a great opportunity for me, and has taught me a lot. Being able to work for the leader in the hospitality industry will only allow me to continue learning, and grow my career.”