Two decades ago, the desktop computer entered the classroom and education hasn’t been the same. These machines are as passé as typewriters for today’s students who instantly communicate and socially interact via hand-held mobile devices.

Will these devices spur a similar educational revolution? 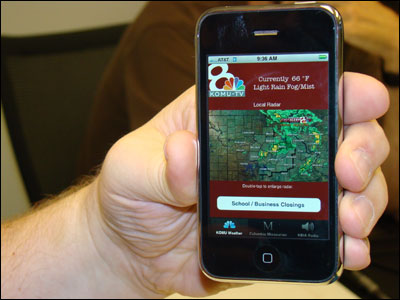 This application of local weather radar was developed by an MU student.

Responding to a challenge by Apple Computer and AT&T, students from several University of Missouri colleges will form interdisciplinary teams to identify and design mobile device applications for education and journalism.

The program strives to help these students learn to innovate through collaboration with peers from other programs. It also seeks to bolster entrepreneurship, strengthen ties between the public and the news media, and develop models for interdisciplinary partnerships to improve higher education.

To date, Apple has sold more than six million first-generation iPhones. The company projects it will sell at least 10 million total iPhones by the end of 2008. 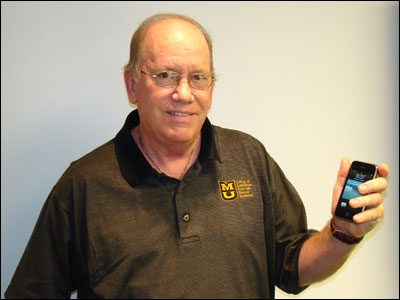 Marc Strid, educational technologies director at CAFNR, with an iPhone. He will work with students to propose and develop new applications for the iPhone.

Marc Strid, CAFNR’s educational technologies director, is coordinating the College’s effort. He said students whose concepts pass an initial evaluation will form a team to develop a prototype product.

Five MU teams will be given resources to develop their iPhone applications.

Each team must include at least one journalism (or ag journalism) student and at least one student involved in computer science, business or education.

These teams will spend the first two months of the Spring 2009 Semester designing their applications, performing usability tests in the MU College of Education’s Information Experience Laboratory and conducting marketing research in the RJI Futures Lab and Technology Testing Center.

They will make final presentations to the judging panel before spring break.

Finalists will be flown to Apple headquarters in California

A panel of judges including faculty, corporate representatives and media industry experts will select the finalists. These 15-20 students will be flown to San Jose in mid-January and housed near Apple’s world headquarters in Cupertino, Calif., where they will receive in-person, private consulting from iPhone/iTunes developers and marketing specialists.

A sneak preview of what the students are contemplating is part of the program. A higher education and industry symposium will be held during April 2009 at the Reynolds Journalism Institute to showcase the students’ work and discuss the implications of the new mobile and digital environment for journalism and democracy, economic development in Missouri and the future of higher education.