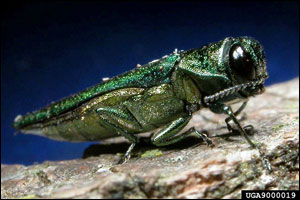 In the old TV crime movies, cops would issue an All Points Bulletin when they were looking for a particularly dangerous criminal. So consider this an APB for a dangerous insect, the Emerald Ash Borer, a nasty little known tree killer.

This criminal bug was last seen in Wayne County, suspiciously eyeing the trees there. Community tree inventories indicate that ash trees comprise about 14 percent of street trees in Missouri cities and 21 percent of trees in urban parks. Ash trees represent more than 30 percent of trees in some subdivisions.

MU Extension is part of an interagency task force preparing for the arrival of the Emerald Ash Borer (EAB) in Missouri. Now that he has been confirmed in the Show-Me State, a response guided by the Missouri Emerald Ash Borer Action Plan was recently implemented by the task force. It is hoped a proactive approach through education and public awareness will greatly help reduce the bug’s impact in Missouri.

The EAB is an exotic Asian beetle accidentally introduced into North America around 2001. Its larvae feed on and kill ash trees. It has colonized parts of Illinois, Indiana, Michigan, Ohio, Pennsylvania, West Virginia, Virginia, Maryland, Ontario, Canada and as of July 25, 2008, in Missouri.

On that day, a U.S. Department of Agriculture employee collected seven suspected EAB (Agrilus planipenn) specimens from a purple prism trap in a campground at the Greenville Recreational Area in Wayne County. The trap is part of the EAB National Survey. There have been no other EAB sightings in the state, to date.

Currently, efforts are underway to determine the extent of the Greenville infestation through on-the-ground visual surveys. Once an infestation has been identified, further actions, such as a quarantine of wood and sawmill products that help transport the bug, are taken to contain this exotic pest.

The mugshot of the adult EAB reveals that he is a dark, metallic green insect that is bullet-shaped and about one-half inch long and 1/8 inch wide. While the back of the insect is an iridescent, metallic green, the underside is a bright, emerald green. The body is narrow and elongated, and the head is flat. The EAB larva is white and flat, has distinctive bell-shaped segments and can grow up to 1.2 inches long.

The EAB moves short distances by flying and longer distances through movement of infested ash. The adult beetle emerges from the tree leaving a D-shaped exit hole that is 1/8 inch in diameter.

What is the likely economic impact of the EAB in Missouri? It could be high in urban areas where infected trees would have to be removed and replaced. A quarantine may be implemented prohibiting movement of firewood, ash logs and ash nursery stock out of Wayne County. Twelve sawmills are located in the county. The impact will be even higher should surrounding counties be added to the quarantine.