If there is a basic ingredient for success in the kitchen, the Kelly Twins say it is hard work, a fun attitude and a good education.

Both got their start as celebrity chefs at the University of Missouri, Bridget at the College of Agriculture, Food and Natural Resources. 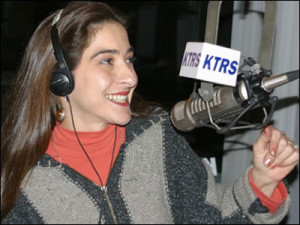 In St. Louis, their radio program, Food Talk With The Kelly Twins, is heard at 5-6 p.m. every Saturday on KTRS 550 AM.

The concept of the TV show, now in its sixth season, is simple: prepare wholesome, delicious food that’s fun and that viewers will actually make. Through the twins’ down-to-earth approach, their audience learns the basic techniques.

On the radio show, the twins feature recipes and kitchen tips and take live calls from people seeking advice on everything from the perfect poached egg to fine-dining etiquette. They also interview local and national celebrity chefs, food authorities, farmers and restaurateurs. They have taken listeners on virtual field trips to St. Louis restaurants and local farms and vineyards to showcase seasonal cuisine.

The twins went separate ways in their educations, ending up in different places than where they started. Margaret, who initially attended MU, graduated from the California Culinary Academy in San Francisco and worked at the renowned Zuni Café.

Bridget graduated from the MU with a degree in general hospitality management. Her initial choice, however, was to attend accounting school. “When Maggie called me to tell me that she was going to be a chef, I decided that somebody needed to be able to run the front while she ran the back, so I switched majors,” Bridget said.

Bridget’s first taste of ‘front-of-the-house management’ was at Ye Old Heidelberg near the Mizzou campus, which she remembers fondly to this day. Her start there was less than auspicious. The general manager responded to her application with, “YOU?! A manager?!!”

After graduation from MU, Bridget spent time in Paris doing an apprenticeship through Maxim’s Hotel School. While in Paris, she completed an externship working the front desk at a hotel in the heart of the city. Bridget said it was a trial by fire as she was assigned to begin immediately behind the desk on her fifth day in a foreign country. “My French improved at a rapid pace,” she said.

Bridget had gone to Paris thinking that she was going to work in the infamous Maxim’s de Paris Restaurant only to arrive and find out that she was assigned to a hotel that had virtually no food service. “I was flat-out laughed at when I asked about my employment at Maxim’s,” she said. “This rude individual exclaimed, ‘Les femmes ne travaillent pas à Maxim’s!’ (‘Women don’t work at Maxim’s!’)”

After Paris, she worked in a number of locally-owned St. Louis restaurants followed by two years at The Ritz-Carlton St. Louis. She later became the culinary consultant for the nationally syndicated PBS program Breaking Bread with Father Dominic.

Maintaining the tradition of real cooking

Bridget told St. Louis’s Alive Magazine that, as kids, they decided that they would work together as chefs as they stood in front of an old oak chest inherited from their grandfathers, who were both chefs. 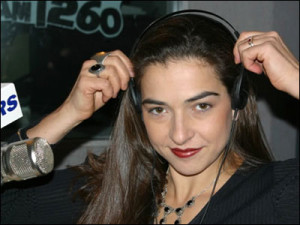 The chest held hundreds of cookbooks.

The twins began to envision their own program while watching TV cooking shows. “Maggie would point out the things that they were doing wrong,” Bridget said.

Growing up with 11 kids in the house, Margaret and Bridget didn’t dine out often. If the kids wanted cookies, the kids made cookies, Margaret said. Both started cooking at such young ages that they had to stand on chairs to do it.

The twins are dedicated to the heritage of American cooking. The last two children in the family, their diet consisted of wholesome Midwestern cooking that used homegrown products raised on the Missouri farm where they grew up. They encourage their listeners and viewers to get back to basics—real food for real people.

Their current TV and radio programs showcase seasonal and local food ingredients for healthy, yet basic dishes. The twins hope simplicity will inspire the audience to cook for themselves.

They emphasize “technique rather than recipes,” because they believe that mastering the basics will lead any average cook to an improved lifestyle and greater success in their kitchen.

“We’ve stopped trying to convince people that cooking is easy,” Bridget said. “In fact, we have a rule where we get to slap the other for saying it! The fact of the matter is that cooking is not always easy. Someone has to plan, shop, put away the groceries, prep and execute the meal. Many in this day and age were not raised in the kitchen like we were (and many of our ancestors a couple of generations ago). Folks walking back into their kitchen today simply do not have the base of knowledge that culturally and historically was passed down from one generation to the next.”

Honesty in the kitchen and TV

The twins avoid what they consider the primary problem with existing cooking shows: staging recipes without discussing or even acknowledging the basics of preparation and execution. Their program always starts with the basics, whether it is roasting a brisket or chopping vegetables. 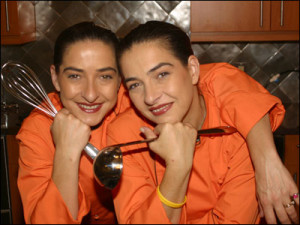 The Kelly Twins in the kitchen

They simplify the process by starting at the same place their audience does, at the beginning. Useful kitchen tips, such as caring for wooden cutting boards, are woven into the fabric of each show.

They also emphasize honesty in their cooking presentations. The TV show is presented uncut and unedited. If a culinary mistake occurs, it is left in—a great way to show that cooking is as much an art as science and that booboos happen and can be overcome.

Early on in the live radio program, Margaret was concerned that they would be asked questions that they could not immediately answer. To prepare, they filled the studio with cookbooks and other scientific resources to help answer such questions as why avocadoes turn brown. Those resources didn’t help when one caller asked how to make Scottish Crack.

It took the twins a week, and consultations with food historians, to come up with the recipe. Scottish Crack is an ancient candy that is cooked into a hot syrup and then dunked into water to make hard candy balls. The terms come from its land of origin and the cracks that appear in the candy.

Often, some of the questions involve important family memories as much as cooking preparation. One woman called to ask why her pork chops stuck to the pan. She related that, as a girl, she and her mother would make the recipe and that this process was their best time together. The sticking problem disrupted those happy memories.

The twins had to go through the woman’s cooking steps twice before finding the answer. The daughter covered the pan with a lid, adding moisture to the floured meat. “We assume that mama never did that,” Bridget said.

Both are married with kids. Margaret and her chef husband, Dave Owens, opened St. Louis’ first ‘green’ restaurant three years ago. Now they have both joined Bissinger’s Chocolatiers, a nationally distributed maker of fine chocolates. While her husband oversees the product line, Margaret is charged with retail development. Bridget’s husband, John Ries, serves as the twins’ business manager.

Recently, the twin’s distributor, Blue Highways TV, inked a deal with Comcast that could bring Twice Baked into 24 million homes.

An expanded audience is a reason to celebrate—more people to share the basics of cooking with and have some fun in the kitchen.