Despite recent progress, Afghanistan remains a poor country. Its agriculture industry, that employs 80 percent of all working Afghanis, hasn’t changed much in centuries. It is a nation that can’t feed itself without foreign aid.

To help change this, a pilot program called the Agri-business Development Team (ADT) has been created. The effort is being led by Missouri National Guard members, many graduates of the University of Missouri College of Agriculture, Food and Natural Resources.

The ADT effort is jointly coordinated by the U.S. Army, the Army National Guard, Missouri National Guard, the University of Missouri, Lincoln University, College of the Ozarks and Missouri Farm Bureau. While the soldiers in the field work directly with farmers, agriculture experts back in Missouri provide technical and research support.

“The Agri-business Development Team is a novel partnership between the Missouri National Guard and retired military farmers and universities to facilitate and educate Afghanis in the rebuilding of their agriculture economy,” said Maj. Gen. King Sidwell, adjutant general of the Missouri National Guard. “Missouri is the leader for this concept, which, if successful, will serve as a model for partnerships in other states.”

“Afghanistan has seen so much war and devastation, they need help creating every aspect of an agricultural economy,” said Sgt. Maj. James Schulte, operations and training coordinator, and one of the leaders in this project. “The United States military has been very active in helping rebuild Afghanistan through schools, bridges and clinics, but this is the first time we are specifically targeting agriculture.”

The ADT will initially work to improve irrigation systems and techniques for fertilizing, planting, harvesting, marketing and storage of agriculture crops. The teams not only advise Afghan farmers, but coordinate with universities and provincial ministries.

The first ADT team deployed to the Nangarhar Province in eastern Afghanistan in Sept. 2007. In February, a larger team of 50 Show Me State Guardsmen arrived in Jalalabad, an important center of commerce. In June, they arrived in Ghazni, a key agricultural area.

ADT members bring personal ties and relationships that allow them to leverage the assets and expertise of MU and Lincoln universities and Cooperative Extension Services within their home state.

“The ADT is a great approach to rebuilding the agricultural economy in war-torn Afghanistan,” said Marc Linit, CAFNR associate dean for research and extension. “Faculty in the College of Agriculture, Food and Natural Resources already have assisted the team by training members in the basics of soil testing, plant disease identification and crop fertilization. This is a wonderful way for our faculty to use their expertise for the benefit of Afghan agriculture.”

“While deployed we will be looking for Afghan solutions for Afghan challenges,” said Maj. Doug Dunlap, ADT executive officer. “Everything that works for Missouri farmers may not necessarily be a solution for Afghan farmers, but we can certainly help them with some technical and infrastructure assistance.”

Dunlap has a diverse background in agriculture, a quality he needs to accomplish his mission. He earned an agriculture economics degree from MU, has a family farm and agri-business background, and has worked several years in agriculture finance.

“The average Afghan farmer probably hasn’t changed much in a couple hundred years,” Dunlap says of the farmers who grow a variety of crops in tiny fields along the Kabul River. “They’re very dependent on manual labor. Tractors are rare. Open ditches carry water for irrigation. Livestock is slaughtered on a dirt lot with no sanitation. Lack of cold storage means farmers are unable to hold onto crops and sell them when prices might be better.”

That lack of cold storage and electricity are major problems to both farmers and the national economy. The nation’s cattle are slaughtered within a few weeks. The sudden glut on the market drives prices to rock bottom. Then, beef becomes scarce again and prices skyrocket.

The same thing happens with row crops. Much of the crop rots in the field, Dunlap said, because there is no market beyond local villagers and across the nearby border with Pakistan.

These are some of the problems the ADT program was created to eliminate. Simple fixes can be a boost to the local economy, which, Dunlap said, could be the exit strategy for the U.S. military in Afghanistan.

Afghanistan has other problems that dog the team’s efforts. Afghanis, particularly in rural areas, are ravaged with a high degree of bacterial and protozoal diarrhea, hepatitis A, typhoid fever, malaria and rabies. The country’s estimated life expectancy is among the worst on Earth at 44.21 years. Much of the population continues to suffer from shortages of housing, clean water, electricity, medical care and jobs.

Lt. Gen. Clyde Vaughn, Army Guard director, said that the Missouri ADT’s successes indicate the concept is sound and another state is already being prepped to enter another province. 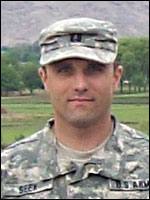 How similar is the Afghan climate to Missouri’s?
The area has four seasons like Missouri but the climate in Nangarhar Province tends to be much warmer and drier. Temperatures in the summer routinely hit above 100F, and most of the water used for farming comes from snow melting off the mountains. I would say the climate is similar to that of Utah.

How similar are the crops, animal agriculture, and production and distribution?
The crops in Nangarhar are very similar to the crops grown in Missouri. The Afghanis grow a lot of wheat, rice, some corn and many types of fruits and vegetables. They are able to grow some crops not suitable to Missouri such as citrus and pomegranate. Livestock in Nangarhar consists of cows, goats, sheep and some camels. Production for both crops and livestock is on a much smaller scale than the average farmer in Missouri. Distribution consists of local farmers growing produce and taking it to the local market to sell. Items that cannot be sold immediately are shipped to Pakistan to be canned, juiced, etc.

What problems are you seeing there?
The major problem we are seeing is a lack of resources. Most of the Afghanis know how to farm; they just do not have the equipment, fertilizer, pesticides, seed, etc. to do it on a large scale.

What was your greatest surprise about the agricultural economy there?
The biggest surprise was how dependant the ag economy is on Pakistan. Currently, most local farmers sell a large portion of their crops to Pakistan because they do not have a way of storing/extending the life of them. Then, they end up buying their own produce back months later at a higher price.

What are the three most important changes that you are recommending that the Afghanis adopt?

Did anything you learned at MU come in particularly handy in your work in country?
Several things I learned at MU have come in handy during this deployment; mainly items pertaining to plant propagation, irrigation and drainage, soils and erosion control.

Are the Afghan farmers and political leaders skeptical about what you are suggesting?
No, they are very receptive to new ideas and thoughts. With that said, we try very hard to use Afghan solutions for Afghan problems. They know this country much better than we do, and already have a good idea of what they need to improve the quality of their lives.

Are there enough locally-sourced, agriculturally-related resources available to you to complete your mission? If not, how are you improvising?
I believe that resources are the biggest constraint for improvement in Afghanistan. We are using everything that is available and then reaching back to the states for information or items that we lack.

What is your background?
I was born in Nevada, Mo. and grew up mostly in Meadville, Mo. I currently work full-time for the National Guard as the Administrative Officer for the 203rd Engineer Battalion in Joplin. Before that, I worked on golf courses as an Assistant Superintendent for several years. I received a B.S. in plant sciences from MU in 1999. My career aspirations are to retire from the military and then put my degree to use again; most likely working on golf courses again. I am engaged and will be married when I get back from this deployment. I hate to admit it, but my fiancée is a KU grad.

Your opinion of your impact on the country.
I think we are having a positive impact on the country and are truly making a difference. With that said, I think it will take years for the Afghan agriculture community to be able to compete and flourish on the global economy.