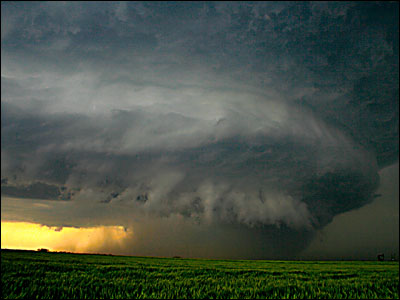 University of Missouri Storm Chase Team leader Taylor Trogdon cringes a bit at TV scenes of storm chasers plunging recklessly toward a tornado. While such antics may gather seconds of dramatic video, the action does little to scientifically understand the mysteries of America’s strongest storms.

Using two new mobile weather recording devices, they intend to simultaneously gather information from different points under a storm. Combined with data collected at a high-tech base station, the team hopes to better see the relationships of wind, pressure and energy that create, grow and kill the storm.

Such an understanding will help the students be better weather forecasters and may improve forecasting techniques.

The MU Storm Chase Team started in 1999, a subset of the College of Agriculture, Food and Natural Resources’ Atmospheric Sciences Club. A student-run operation, about 35 students are involved. Most intend a career in broadcast meteorology, research, private forecasting or the National Weather Service.

The MU team is most interested in supercell storms, the most violent thunderstorms. 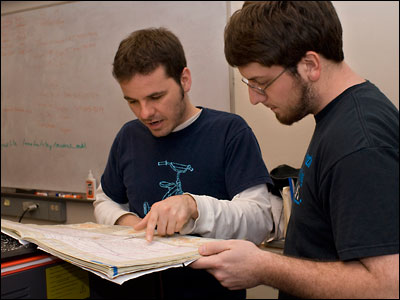 Southwest Missouri and eastern Kansas are hotbeds for thunderstorm activity with an average of 50-70 storms each month during the storm season. Only Florida sees more activity. About 10 percent of U.S. thunderstorms are classified as severe.

Flash floods associated with thunderstorms kill about 140 people annually, lightning kills about 100 and tornadoes another 100. Large hail causes about $1 billion worth of damage to property and crops each year.

The team’s command center is the Weather Visualization Laboratory located deep in the basement of the Agriculture Building on MU’s Columbia campus. The basement, once a Civil Defense shelter, can probably withstand a hit from an EF5 tornado.

During a chase, a five-person base team populates this center. They monitor storm development, analyze data, plan strategy and relay information and instructions to the chase team via cell phone. 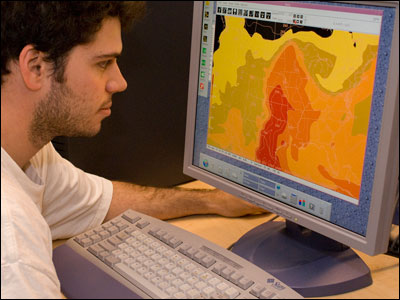 Leading the base team is the overall team leader. This member is responsible for safety and directs the chase team to the best spots under promising storms.

Another base team member monitors radar and other imagery and another watches now-casting data. Now-casting is a subset of meteorology that deals with very short-term forecast models in a specific area.

Two underclassmen round out the base team, providing support and learning the trade.

The chase team is made up of one to three cars with four students inside each, said Derrick Ray, a junior who intends a career in operational meteorology.

As on TV, the base team leader decides which storms should be observed, communicates storm development and advises the chase team on road directions and good data-recording locations. One chase member has a GPS and is responsible for making sure the team doesn’t get in a dangerous spot, lack escape routes or interfere with emergency personnel.

In previous years, the chase team gathered data with video and still cameras. This year, the team has new tools. The College, the Soil, Environmental and Atmospheric Sciences department and the MU Atmospheric Sciences Club donated two high-resolution weather recording stations that attach by magnets to the tops of the cars.

These devices gather precise humidity, rain total, pressure, wind direction and speed, and temperature data every five seconds—as opposed to every five minutes of conventional stations. This gives the students valuable information on rapid weather shifts that occur around and in the storm.

These devices are time- and position-synched with other data collected by the chase team and data streaming into the base station. All of this data viewed as a whole provides a rather complete view of storm’s formation, life, maturity and decay, Trogdon said.

Thunderstorms in general and supercell storms in particular are complex mechanisms where a multitude of different characteristics must work together for the storm to exist, Trogdon said. Two more mobile weather stations will allow storm observations data from additional major parts of a storm where different things are simultaneously happening.

Trogdon, who will pursue operational meteorology after graduation, points out that the southwest corner is where tornadoes often form. The northern part of the storm usually sees the heaviest precipitation. The south-east part is ideal to measure the inflow of moist and warm air that fuels the supercell. A meso-scale cold front boundary usually divides the southeast and southwest corners of a supercell in half.

Storm damage data is also a part of the matrix. That is acquired from the National Weather Service so the chase team won’t hinder rescue personnel, Ray said.

Data from each significant storm observed by the students will be analyzed, shared with their MU and other university student colleagues and presented as a case study at scientific meetings.

“You never know what kind of data you might collect,” Ray said. “You may get a freak storm that doesn’t follow the norm. If you are collecting a lot of data, you may learn something about all storms.”