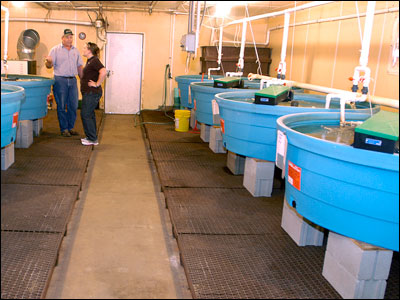 COLUMBIA, Mo. – Abandoning the hog business to start a fish farm may seem an odd choice in Missouri, but that’s exactly what Higginsville, Mo., farmer Ellis Dieckhoff did when he converted his hog barns into a hatchery for bluegill, which he sells as bait fish.

The move set Dieckhoff apart from his neighbors, who raise livestock or crops. But diversifying is what farmers should do to safeguard their farms and communities, said Crystal Weber, University of Missouri Extension community development specialist in Blue Springs.

“Diversifying allows him to get income throughout the year and decreases his level of risk,” said Weber, who specializes in local food systems and helping farmers find markets for their products. She has been helping Dieckhoff since 2004, when a former MU Extension livestock specialist referred Dieckhoff to her.

After raising hogs on his family farm his whole life, Dieckhoff left the pork industry nine years ago due to low prices. When he took over the farm from his father in 1987, hogs sold for about 40 cents per pound. When he got out in 1999, he sold his sows and fat hogs for just 8 cents per pound.

“We just couldn’t handle the price anymore,” he said. “We thought we could withstand the ups and downs of the cycle, but we couldn’t. It never cycled back.”

Dieckhoff leased his hog buildings for a few years, and then they sat empty for three years. In 2004, Dieckhoff got the idea to raise fish and started researching options. “It’s just another thing I was trying to make the building pay for itself and generate some income,” he said.

Before he knew there was a bait fish industry, Dieckhoff looked at raising fish for food. Weber helped him find potential food fish markets in the Kansas City area.

“Crystal got me in touch with chefs in Kansas City who were interested in locally produced fish,” Dieckhoff said. 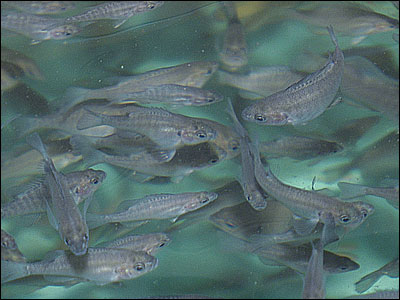 Fish raised for food are expensive to produce, however, and he had read that fish could be raised for bait at much lower cost.

He learned about bluegill research at Lincoln University and worked with a Lincoln aquaculture specialist to develop indoor hatchery methods.

Dieckhoff won $6,000, the maximum amount available through the SARE program. The grant covered half his costs and gave him peace of mind because he was not taking a huge financial risk.

Weber said Dieckhoff got the grant because fish farming was unique, and the funds would strengthen his family farm.

Weber said that grant recipients are expected to share results of their projects with the community.

“Since he was going to be one of the only folks in our state who is an aquaculture farmer, there was the hope that he could be a resource for the community,” she said.

Dieckhoff uses two former hog barns as a nursery, where he spawns the fish, and a hatchery, where he grows the fingerlings to 4 or 5 inches before selling them to the aquarium industry as bait.

There have been challenges, but now the market is so good he can’t keep up with demand, he said. He initially planned to raise fish all year, but he learned the fish will not spawn between November and March.

Raising fish inside fools with Mother Nature, he said. “There are days when all these tubs will be full of spawn, but three days later I come in and three-quarters of them are dead. Like any other new project, there was and still is a huge learning curve that we are dealing with.”

This spring, Dieckhoff plans to experiment with outdoor ponds, and he still has interest in the food fish market. The biggest obstacles to that are cost and the difficulty of reliably producing a quality product, he said.

Weber said Dieckhoff’s readiness to try something new should be a model for other farmers.

“Ellis is a prime example of what opportunities exist for farmers,” she said. “People have land, they have the resources. In Ellis’ case, he had all the facilities. He just had to retrofit them. There are a lot of opportunities for someone willing to do something a little bit different.”