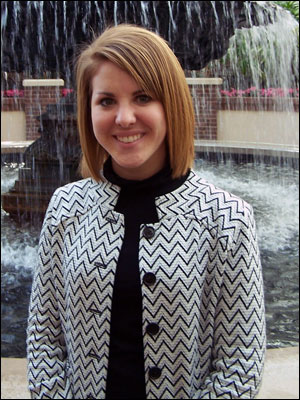 Whitney Wallace, CAFNR class of 2010 agricultural journalism major, was awarded the 2008 Emerging Leadership Award by the University of Missouri Department of Student Life’s Center for Leadership Development. The award was presented at the Chancellor’s Excellence Award ceremony in early April.

Wallace is one of CAFNR’s rising stars. In addition to her coursework, she is the public relations chair for the Collegiate Farm Bureau, on the Alpha Chi chapter of Sigma Alpha’s public relations committee, a member a of the recruitment team for the CAFNR Student Council and the CAFNR Week Steering Committee and was chosen to participate on the CAFNR Ambassador Team.

The Department of Student Life annually presents the the Chancellor’s Excellence Awards. These awards are designed to recognize students who have made outstanding contributions to their communities through their involvement, service and leadership development activities.

Wallace has written more than 20 articles and done broadcast work for CAFNR Cornerpost, produced tabloids and newsletters for FFA and coordinated Food for America Day and Farm Safety Day for local elementary students. Her fundraising efforts have exceeded their goals and provided eight high school seniors with college scholarships.