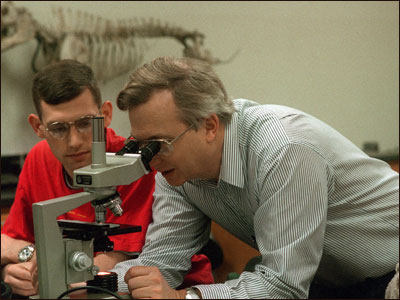 The award recognizes an exceptional mentoring relationship that a graduate faculty adviser has developed with his or her graduate students.

Smith earned his Ph.D. in physiology of reproduction from Texas A&M University.

He came to MU in 1980 as an assistant professor. He was promoted to professor in 1990. He served as interim director of the Division of Animal Sciences from 2001 to 2006.

The Division of Animal Sciences at the MU College of Agriculture, Food and Natural Resources was presented the 2008 Outstanding Departmental Contributions to Graduate Education Award. The award is presented annually by the MU Graduate School.

The threefold mission of the Animal Sciences Division is to provide high quality education to undergraduate and graduate students that better allow them to understand and contribute to a rapidly changing global and culturally diverse society, enhance strategic research that solve problems of animal agriculture and human medicine, and maintain relationships with clientele groups to ensure that research and education issues are identified and addressed.

The division has members involved in teaching students. In the last ten years, the amount of grant money obtained by the faculty has increased approximately fourteenfold. From 1999 to 2004, faculty received 14 research awards and seven of the awards were at the national level.

“We received the award because of outstanding mentoring of students and strong research programs in the department, and consequently the high placement rates, especially into academic positions,” said William Lamberson, professor of physiological genetics.