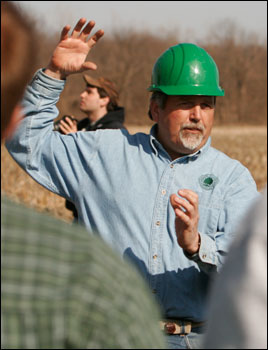 Bill Spradley, a certified arborist, discusses work on the tree.

It is a tree that has seen the history of Missouri.

It probably emerged from the ground as a sapling along the Missouri River near present-day McBaine about 350 years ago. As it grew, it saw the first French fur traders float down the river.

It was about 150 years old when the Lewis and Clark expedition passed by. It lived through the Civil War, World Wars I and II, and months of standing water during the Flood of 1993.

A survivor of uncounted tornadoes and lightning strikes, the 90-ft. tall, 91-inch wide tree was stressed. Probably the second largest bur oak in the nation, the soil around it has been compacted by cars and some of its dead limbs were infested with wood decay that threatened the other branches and trunk.

In short, it is a situation that MU Horticulturalists and Bill Spradley, a certified arborist who received his forestry degree from the University of Missouri College of Agriculture, Food and Natural Resources (CAFNR) in 1982, could not tolerate.

On an unusually warm March day, Spradley and his crew from his Kirkwood, Mo. firm Trees, Forests and Landscapes Inc., joined volunteer MU faculty and staff to save the tree with fertilizer, tools, a crane, chainsaws and climbing ropes. 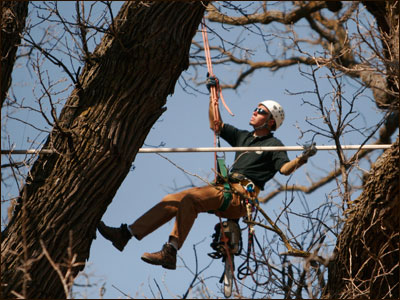 Suspended dozens of feet in the air, the team pruned the deadwood.

Into the ground a nutrient boost with two specialized fertilizers was injected.

Workers also drilled holes in the ground surrounding the tree to aerate the soil that had been packed down by cars cutting across the farm field instead of staying on the paved road.

“I think the aeration is a good idea and I hope that it will have a major impact,” Christopher Starbuck, associate professor of MU plant sciences, said. “I think that one reason the tree is so large is that it is growing in ideal soil. It is well drained, but the water table is just eight feet below the surface. This means that the tree probably has roots that are growing only six to eight feet deep.”

This wasn’t the first encounter that Spradley had with the tree. Thirty years ago as a CAFNR freshman studying forestry, he visited and fell in love with the massive oak, then recognized as the state’s biggest bur oak.

When he came back in 2006 to visit his son, Kyle, an MU agricultural journalism student, Spradley revisited the oak and was saddened to see its decline. He took it upon himself to form a team that would give the tree its best shot.

That led to CAFNR horticulturist Starbuck who approached the landowner, John Sam Williamson, for permission to start the project. Spradley examined the oak and developed a five-step plan of stabilization and renewal that was presented to Williamson. 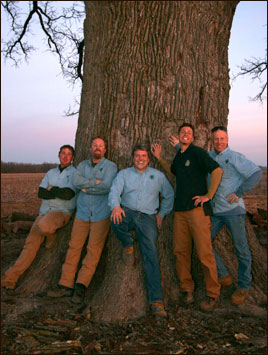 MU Campus Facilities experts, who normally trim the trees on the Columbia campus, joined the team, too.

“I think it was great that MU Landscape Services volunteered the services of their arborists to assist with the project,” Starbuck said. “I think they felt privileged to be able to climb the tree and play a part in prolonging its life.”

Spradley’s company donated equipment, labor and about eight hours to the project.

Starbuck, Earl Cully of Earl Cully Heritage Trees in Jacksonville, Ill., and Mark Coggeshall of the MU Center for Agroforestry will graft a number of scion pieces from the tree onto seedlings to produce trees with the exact genetic makeup of the McBaine tree that will be planted at various sites around the Midwest.

“This will perpetuate the genotype, which we want to preserve,” Starbuck said. “It could be that this tree’s progeny will live for another thousand years.”

Spradley’s passion and profession is in saving historic trees and urban forests. He travels the country helping clients keep their old and historic trees alive and healthy.

Saving the tree was important from historical and aesthetic perspectives, but also in a competitive sense. The McBaine tree is only about two points in size away from the national champion bur oak in Paris, Ky. Should the Missouri tree continue to grow and thrive, it could displace the current champion.

Spradley and the MU team took measurements in hopes that the Missouri tree may have already broken the record. According to the American Forests National Big Tree Registry, the Kentucky tree hasn’t been measured since 1980. New measurements taken this year of both trees may place Missouri at the top.

The McBaine tree may have more Missouri history to see, and make.