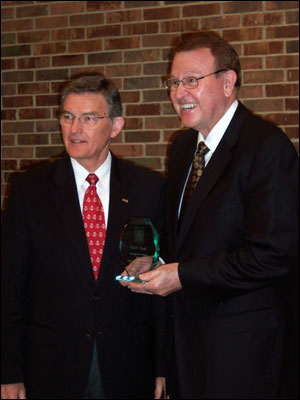 Paul R. Vaughn, associate dean for the University of Missouri College of Agriculture, Food and Natural Resources, was presented the 2008 Distinguished Alumni Award from The Ohio State University.

Vaughn, who earned his Ph.D. in Agricultural Education there in 1976, was recognized for his leadership in academic programs at MU and his contribution in several national educational organizations, from the FFA to the National Association of State Universities and Land Grant Colleges.

The Distinguished Alumni Award gives public recognition to OSU alumni who have brought distinction to themselves, their college, community and their profession through their commitment and leadership.

Vaughn earned his B.S. and M.S. degrees from New Mexico State University in Ag and Extension Education before going to OSU. He also served as a high school agriculture teacher in New Mexico.

A recipient of numerous awards, Vaughn has been recognized for his commitment for teaching and his administrative performance. He has served on a number of state and national boards, task forces and committees doing work to influence the development of secondary agricultural educational programs and agricultural teacher education programs throughout the U.S.

In 1998, he spent a month on Sana’a, Yemen as a consultant for the Center of International Development where he assisted with the development of B.S. and M.S. degrees at the University of Sana’a for students who want to teach at two year postsecondary institutions. He has also led a trip for National FFA Officers to study agriculture and education in Japan, Hong Kong and the People’s Republic of China.