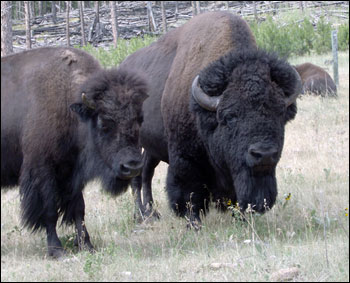 Once, buffalo roamed the American prairie in complex societies where offspring were raised and protected according to instinct and learned responses. Today’s descendants of these vast herds live on preserves under the care of wildlife managers.

To see if the practice of forced weaning, the early removal from a calf from its mother, changes the dynamics of how offspring relate to the group as they grow, a University of Missouri College of Agriculture, Food and Natural Resources student travelled to South Dakota to observe calves as they made their first steps into joining their herd.

Following the bison herd at the Custer State Park in a 4X4 pickup, Alyce Johnson, a senior in Fisheries and Wildlife Sciences at MU, monitored radio-tagged “force-weaned” and “naturally-weaned” calves as they integrated into their larger social group. She found surprising differences that indicate that forced-weaned buffaloes may not be joining the herd in the same ways as in the 1800s, leaving them more prone to attack by predators.

Forcing weaning is the procedure of removing an offspring from its nursing mother prematurely and providing it with a solid diet. Park managers do this to more accurately count and assess the calves, as well as administer medical attention to the calves when needed. 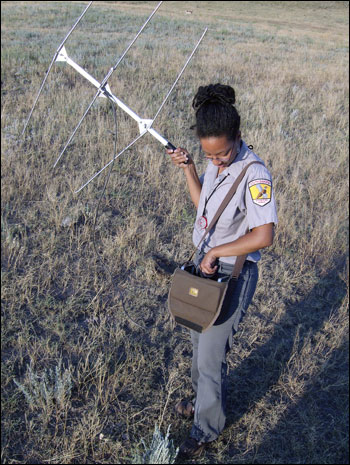 Johnson’s observations showed that the force-weaned group tended to bond with other forced-weaned calves at a greater than expected rate. The naturally-weaned adolescents, on the other hand, spent more time with their mothers.

“The data indicates that the maternal social structure of bison herds is complicated,” Johnson said. “The bond among animals that were force-weaned appears to be stronger than maternal bonds of naturally-weaned cows. More research is needed to better understand this relationship.”

The research has several implications for those who manage bison herds. Forced-weaned calves may be at greater risk for disease and injury as they are not benefiting from the protection and guidance of an older cow. These yearlings spend more time in the periphery of the herd than near the center, potentially facing an increased predation risk. Force-weaned yearlings also incurred more aggression from older members of the herd than naturally-weaned yearlings. The process of force-weaning is also stressful and disruptive for the calf, Johnson said.

The fisheries and wildlife degree that Johnson is earning is her second undergraduate accomplishment. She earlier received a degree in animal science. The Lee’s Summit, Mo. native now plans on pursuing graduate work in the wildlife management area.

A scientific poster presentation on the South Dakota work recently won her accolades at the annual Biomedical Research Conference for Minority Students. Her faculty mentor is Josh Millspaugh, Ph.D., associate professor of Fisheries and Wildlife Sciences. Her research studied maternal bison groups in South Dakota from Oct. 2005 through July 2007.

Her data also supports that social changes created by forced weaning also extend into the adult life of the bison and to later generations. Forced-weaned mother bison were seen to associate more with forced-weaned colleagues than with other members of the herd, affecting the social relationships of later offspring.

“Our research suggests operations that want to maintain a ‘wild’ bison herd should not engage in force-weaning as it disrupts the social organization of the herd,” Johnson said. “However, operations that do force-wean may benefit from selling same-aged cohort groups together as these animals may perform better as a social unit than other groups. In operations that allow the herd to naturally wean, maternal groups should be sold together at least until a cow is three years of age.”