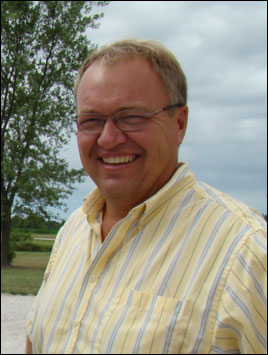 Things have been rough for the bobwhite quail since the 1950s when intensive “fence row to fence row” farming destroyed much of their habitat.

Today’s quail population is about one-fifth of what it was during those days.

And the bobwhite’s problems extend throughout the wildlife food chain. Bobwhites exist at the bottom of the wildlife menu, so fewer of them mean less food for succeeding levels, the hawks, raccoons, foxes and coyotes.

Since 2003, a research project at the University of Missouri College of Agriculture, Food and Natural Resources has tested practical ways that farmers can maintain maximum productivity while leaving enough habitat for the bobwhite to thrive. Since that time, Audubon Society counts have recorded a 23-fold quail population increase at the research farm where the project is being conducted.

Tim Reinbott, superintendent of the MU Bradford Research and Extension Center southeast of Columbia, is a self-described bobwhite supporter who also understands the financial challenges of modern farming. Working with Bob Pierce, an MU Extension Fisheries and Wildlife Specialist, he’s cut out about 40 acres on the 591-acre research farm to test different ways habitat and crops can co-exist.

The project, called Integrating Bobwhite Quail Management into Modern Agriculture, is funded with grants and in-kind donations from MU, the Missouri Department of Conservation, the USDA Natural Resources and Conservation Service and the Missouri Soybean Growers Association.

The bobwhite quail, known for its whistle-like bob-bob-white song, are small birds, weighing only five to six ounces. The game bird can fly short distances up to 30 mph. 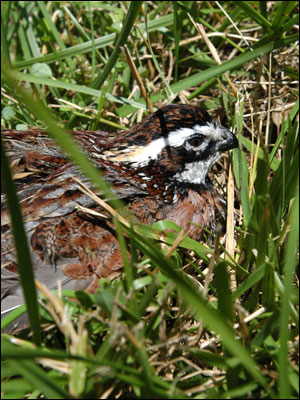 They nest on the ground and live for about a year. Conservationists consider them a significant barometer of a local ecosystem’s health.

The techniques being developed at Bradford Farm are simple to implement and require little financial outlay by the farmer, just information and an awareness of life from the birds’ point of view.

One of the first discoveries of the project showed that farmers need not work so hard to remove undesirable shrubs and bushes from unused portions of their land.

Leaving these areas provides escape cover, one of the most important habitat components that quail need to survive.

If farmers do feel the need to do something, they can use “edge feathering” techniques where a woodland and crop field meet to create escape cover, Pierce said. This technique thins the edges of the woodland by cutting trees near the edge and allowing shrubs and annual plants such as ragweed to thrive. This practice creates cover immediately and stimulates the growth of annual plants which provide seeds that bobwhites eat throughout the year

These feathering techniques can be enhanced by using plants that produce a year-round food supply. Adult birds prefer sunflower and millets that keep their seeds during the winter. Reinbott recommends maintaining these plants at varying heights so the ground-dwelling birds can get a meal despite any depth of snow.

Legumes, such as partridge pea and species of lespedeza, produce an excellent seed source for quail. In addition, these plants attract insects that bobwhite chicks eat. In the 1950s, farmers planted a type of legume called lespedeza that cattle ate and attracted tasty bugs for the youngsters. This helped spike numbers of quail throughout the state. Unfortunately for bobwhites, that plant is little used today.

The project also found that habitat encouragement can also enhance profitable farming. For example, research found that spring burning of warm-season grasses made the next season’s grasses come back even thicker, making it hard for young chicks to move and forcing the farmer to employ even more cutting and chemicals. Burning in the fall is a win-win—it doesn’t disrupt the quail and makes grass control easier on the farmer.

Research also demonstrated that planting up to the fence rows is not profitable. Reinbott and Piece share with farmers a display showing corn ears that become progressively smaller and more withered as they approach field corners or fence rows. Farmers can save money by not planting crops in these field border areas, but instead plant more bobwhite-friendly grasses in a 30-50 foot strip around the edge of the field. 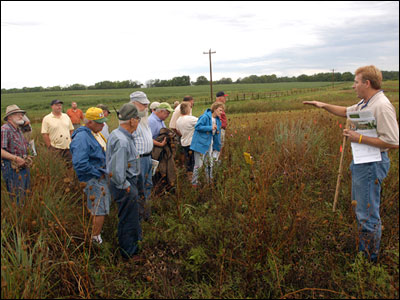 Each year, hundreds of farmers visit Bradford Farm to check out the techniques and attend workshops.

Twice a year, Reinbott and Pierce hold a Quail Day where farmers learn about the discoveries and the birds’ place in the ecosystem.

They conduct training sessions with extension agents and other agri-business people who then communicate what they know to Midwestern farmers—and programs that can help pay a portion of the cost for habitat development.

Once, a national crop insurance company conducting a hail damage seminar broke away from their classrooms to check out the experimental habitats.

Reinbott takes his show on the road, too. He was a speaker at a recent international agronomy scientific meeting in New Orleans—the only wildlife-related speech of the event. Slowly, details are getting out among other research stations, universities and agriculturally-related companies nationally.

But the future could still be gloomy for the bobwhite as a trend in agriculture to biomass production as fuel encourages intensive land use. Reinbott said to get the tonnage of switch grass or other bio products needed to be profitably made into fuel, farmers will have to create mono-crop fields that are farmed to the fence row, creating a virtual wasteland for wildlife.

So this spring, Reinbott, Pierce and researchers at the College of Agriculture, Food and Natural Resources will gear up a new research project to help a hard luck bird that can’t seem to catch a break.