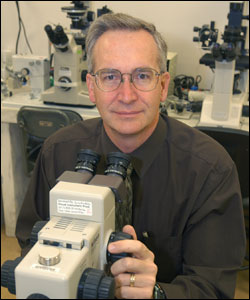 Cystic fibrosis is the most common genetic disease in Caucasians. The median lifespan for those with the disease is 36 years and lung disease is the major cause of mortality.

“When you make the same genetic mutations in mice that people have, mice don’t get the lung disease that’s associated with cystic fibrosis, so no model currently exists to research lung disease caused by cystic fibrosis,” said Randy Prather, distinguished professor of reproductive biotechnology in the MU College of Agriculture, Food and Natural Resources. “Compared to mice, pigs may be a good model for human genetic diseases because their anatomy, biochemistry, physiology, size and genetics are more similar to those of humans.”

Cystic fibrosis is an inherited chronic disease that affects the lungs and digestive system of about 30,000 children and adults in the United States (70,000 worldwide).

A defective gene and its protein product cause the body to produce unusually thick, sticky mucus that clogs the lungs and leads to life-threatening lung infections. The problem also obstructs the pancreas and stops natural enzymes from helping the body break down and absorb food.

Prather collaborated with Michael Welsh from the Howard Hughes Medical Institute at the University of Iowa. To create the genetic defect in pigs, a team led by Welsh made genetic modifications in pig cells. Prather’s group then generated the genetically modified pigs from the cells using a method called nuclear transfer.

With the genetic modifications, the researchers hope they will be able to mimic the lung disease that afflicts humans who have cystic fibrosis.

Both researchers said they will have to wait to see if the pigs that carry both copies of the defective gene display symptoms related to those associated with cystic fibrosis in people.

“The gene that is mutated in individuals with cystic fibrosis was discovered in 1989; yet, we still do not understand many aspects of this disease and our treatments remain inadequate,” Welsh said.

“Although scientists and physicians have learned much from studying cystic fibrosis mice, to make progress and improve treatments, we need an animal that at least partially mimics the lung disease of humans. We also are working with other University of Iowa researchers who are doing similar work with ferrets. We hope that these first steps will ultimately provide scientists with the means to better probe cystic fibrosis and aid those who suffer its ravages. We have our fingers crossed that these animal models will help.”

The production of these pigs could provide researchers with opportunities to conduct studies investigating treatments and therapies for cystic fibrosis that were not previously possible. Scientists have used mice when studying a variety of other diseases that affect humans. However, there are many diseases where mice fail to replicate the human symptoms. For example, more than 11 mice models have been developed to study cystic fibrosis; yet, none of them developed the spontaneous lung disease.

“We believe that this discovery could lead to additional uses of the pig when studying other diseases,” Prather said. “The pig is very much like humans in many respects and may be a key to finding cures, treatments and therapies for many diseases that affect the world.”

The study was funded by grants from the National Institutes of Health, the Howard Hughes Medical Institute and the Cystic Fibrosis Foundation.