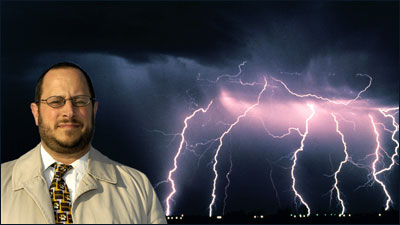 As Tony Lupo calculates it, he might be a one-two-thousandths recipient of the 2007 Nobel Peace Prize.

Lupo, an associate professor of atmospheric science in the University of Missouri College of Agriculture, Food and Natural Resource’s Department of Soil, Environmental, and Atmospheric Sciences, is a contributing author and expert reviewer for the Intergovernmental Panel on Climate Change (IPCC) that shared the prize this summer with former vice president Al Gore, Jr.

When you compute the number of IPCC climate scientists who earned their half of the prize, each member is a one-two thousandths winner of the distinction. Lupo has been an invited member of the organization since 1995 and has contributed research data to three global climate evaluations.

Lupo’s research interest involves some of the largest aspects of weather—continental-sized high and low pressure systems, cold and warm fronts, hurricanes and other major weather events that affect multiple states. He is particularly interested in a jet stream phenomenon called “blocking.” Here, the jet stream, a massive river of fast moving air that encircles the northern hemisphere, can divert smaller scale systems in unexpected ways and bring dramatic and rapid weather changes.

Blocking and the effects of a warming El Niño and cooling La Niña in the eastern Pacific Ocean are the areas where Lupo most contributed to the latest climate survey that helped Gore and the IPCC gain the peace prize. El Niño and La Niña are key elements in the overall heating or cooling of the planet, particularly in North America.

The IPCC is a scientific body, established in 1988 by the United Nations, tasked to evaluate the risk of climate change caused by human activity. The IPCC does not carry out research, itself. It bases its assessments mainly on peer-reviewed and published scientific literature.

Understanding the correlation has allows meteorologists to perfect long-range forecasts and identify temperature trends that can span decades. This data indicates that the planet is nearing the end of a general warming period, which will probably be followed by overall cooling. “However, one thing is for sure,” Lupo said, “there is still a lot we don’t know about the climate and how it works. There is still much to learn. What the climate will be like at the end of the century may surprise us.”

The next step in Lupo’s research will see if his research results can sharpen the understanding of weather trends in America’s heartland, allowing Midwestern farmers to better choose their planting and harvesting cycles to produce greater yields. Large cities will benefit from this knowledge through more accurate planning for severe weather events. El Niño and La Niña variations are even known to influence the number and strength of tornado outbreaks—perhaps a new puzzle piece that can give forecasters one more way to provide more reliable warnings.

Lupo earned his master’s and doctoral degrees in atmospheric sciences from Purdue University. As one of scores of IPCC scientists involved in climate research, he wasn’t individually invited to don black tie and tails and travel to Sweden to accept the Nobel Peace Prize on Dec. 10. He also won’t get to share in the cash award, either—that goes to the IPCC itself.

One-two-thousandths of the award probably wouldn’t pay for the plane fare, either.