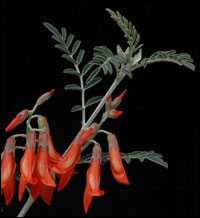 More than 33.2 million people worldwide live with the HIV/AIDS virus and more than 25 million have died from the disease since 1981, according to the World Health Organization (WHO).

WHO estimates that more than 80 percent of the African public uses traditional medicines, and recent surveys in the United States suggest that between 50-75% of the American public uses complementary and alternative medicines (CAM).

An international research center co-directed by William Folk, Ph.D., biochemist, in the University of Missouri College of Agriculture, Food and Natural Resources and the School of Medicine, will study the medical effectiveness of the plant commonly called Sutherlandia. A clinical study seeks to determine if the plant is safe and can benefit people in the early stages of HIV/AIDS. 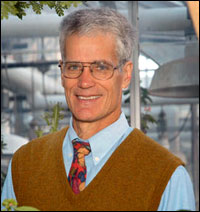 The clinical trial will enlist 120 South African adults infected by HIV with early stage disease. Sixty will receive capsules of Sutherlandia, a legume that is purported to boost immunity, relieve depression and improve appetite. An equal number of subjects will receive a placebo. A team of doctors at Edendale Hospital, led by Doug Wilson, Ph.D., chief of Internal Medicine, will monitor their health over six months. Results of the trial should be available by late 2009.

South Africa is a hotspot of botanical diversity, with more than 25,000 indigenous plant species. Thousands of these are used by the public, particularly those for whom conventional medicines are unavailable. Few of these treatments have been scientifically tested. Sutherlandia has been used for generations as a remedy for stress, influenza, asthma, bronchitis and gastritis, and is now being used to treat HIV/AIDS, but without extensive use to determine its safety or value. The clinical trial will help provide this information to the millions infected by HIV who trust that it is safe and effective.

“We need to practice considerable caution in communicating about this research because HIV positive people will jump at anything if they think it has a chance to save their lives,” said Leszek Vincent, CAFNR plant scientist and collaborator in the research. “While this ground-breaking clinical trial research is just scratching the surface, it could provide some pointers in the treatment of people suffering from this devastating disease. It could be a win-win situation that enables good science to be done and enables traditional healers to be better informed.”

While herbal medicine is seen by some Western physicians as a backwater science, there is strong evidence that some folk remedies can live up to unscientifically-proven claims, Folk said. He points to aspirin’s active ingredient that is extracted from the bark of a white willow plant that formerly was used as an herbal remedy.

Digitalis, that helps regulate heart rhythms, also once a home remedy, as was a drug called Artemisinin, effective in treating malaria. A number of current medicines used to treat cancer are derived from plant extracts.

Other TICIPS projects focus on Artemisia afra (African wormwood), which is widely used to treat respiratory infections, and is a relative of sagebrush.

Another project will examine the plant’s potential for preventing or treating cervical cancer. TICIPS researchers from Mizzou, Georgetown University, University of KwaZulu-Natal and the University of the Western Cape are collaborating on this study.

“Nature has thousands of secrets that we have yet to discover,” Folk said. “This is a step in uncovering some of those secrets and seeing how we can help the public burdened by infectious diseases and lacking medical infrastructure, better understand these traditional and alternative medicines.”