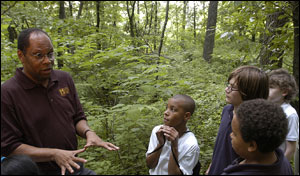 The future of wildlife conservation in the city depends on the next generation, but there is concern urban children may not be in touch with wildlife.

With ethnic minority groups making up a large portion of city populations, a University of Missouri study looked at the experiences urban minority kids have with wildlife. According to the study, early involvement is important.

“Even in cities it’s possible for kids to have really positive experiences with wildlife,” said Charlie Nilon, associate professor of urban wildlife management at the MU College of Agriculture, Food and Natural Resources. “Remember, we’re not talking about wildlife where you have to drive 50 miles to see it, but rather the kind of wildlife where you can walk out your back door and see something.”

The study involved African-American and Latino students. Nilon and Stan Van Velsor, then a graduate student at MU, found that a negative experience with wildlife around a child’s home could limit future contact with nature.

“A lot of kids that are from inner-city neighborhoods live in houses that are not in very good condition, so sometimes the kind of experiences they have with wildlife are seeing raccoons in their garbage cans or actually inside the house. It’s not as pleasant as it is when you walk along the trail, and you see something,” Nilon said.

Nilon said it’s important to foster an appreciation of wildlife at a very young age despite a child’s location. A child’s curiosity will grow as he or she gets older.

“The idea of getting kids involved is that if you’re engaged when you’re four or five, and then you get those positive messages when you’re a teenager, you’re going to be engaged in wildlife and you’ll be a person who recognizes the value of places like this and therefore really be involved in the conservation,” he said.

“It gets kids engaged right in their neighborhood. It gets their parents involved because they pick up their kids every day and ask what they learned, which gives the children a chance to talk about encountering wildlife,” Nilon said.

According to the data from the MU study, it doesn’t matter what kind of nature activity takes place as long as it’s safe, positive and happens on a frequent basis.

“If you can get kids engaged, our results suggest that they’ll develop really positive attitudes about wildlife and those attitudes will continue,” Nilon said.